For first time, Israeli government to officially dedicate a day to demonstrate appreciation for people who make aliyah; Oleh leader: 'We come here to give, to be pioneers.'

The Knesset is expected to unanimously approve on Monday a second and third reading of a bill which will introduce a new holiday in Israel: Aliyah Day.

The bill states that every Nissan, a month in the Jewish calendar which falls around spring time, the state of Israel will express its appreciation for for those who immigrate to Israel.

The same say, the Knesset will dedicate a special discussion to the subject while the cabinet will do during its weekly meeting. Moreover, the occasion will be marked by educational institutions and by the president’s residence. 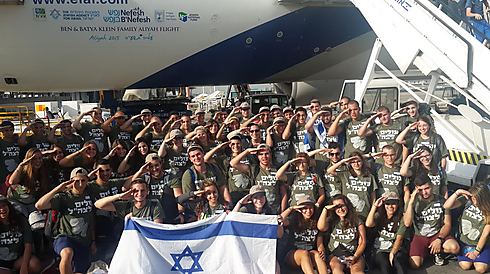 Jewish group makes Aliyah (Photo: Moshe Glantz)
The bill was the initiative of a group of young people, most of whom have moved to Israel from the US and who now reside in Tel Aviv, and activists from the ‘TLV Internationals’ organization.

“Aliyah Day is an opportunity for the State of Israel to reach out to all Jews across the world, and to say that Israel is more than a place to consider living; Israel is their home,” said Jay Shultz, the founder and director of the organization.

“For us, young immigrants have a lot of strength, and Aliyah is something that we are extremely proud of. We come to Israel in order to give. We choose to be pioneers and we feel a lot of pride about this. It is a good thing that now the State of Israel will dedicate an official holiday to Aliyah,” said Jay.