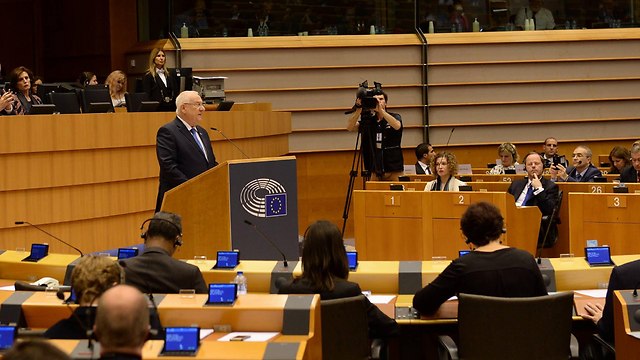 Israeli president addressed the European Parliament and spoke of Israel's yearning for peace, while condemning international involvement for involvement's sake that does not take into account certain realities and historical facts.

President Reuven Rivlin delivered a special address before the plenary of the European Parliament on Wednesday. He addressed European attitudes to Israel, dismissed the French peace initiative, and spoke of the peace process with the Palestinians

Rivlin's speech comes a day before the UK referendum on a potential Brexit and following a recent peace conference in Paris that did not include Israel. He was received on his arrival by President of European Parliament Martin Schulz, and the two stood for the Israeli and European anthems.

Rivlin began his address by stressing the historical significance, and modern strength of Israel's relationship with Europe and commented on their shared values, "Liberty, equality, justice, pluralism and religious tolerance, democracy; these are the basic tenets inscribed in Israel's Declaration of Independence. These are the constitutive values of the European Union."

Rivlin addressing European Parliament (Photo: Mark Nieman, GPO)
The president noted though that there was growing frustration that Israel's core concerns were not appreciated, "Just like you, Israel faces difficult and complex challenges. But, unlike Europe which embarked upon a process of removing partitions between nations and states, Israel wishes, and indeed must, remain first and foremost a national homeland, a safe haven for the Jewish People." He noted, "The State of Israel is by no means a compensation for the Holocaust, but the Holocaust has posited as a basic tenet the necessity and vitality of the return of the Jewish People to history, as a nation taking its fate in its own hands."

The president stressed, "I feel that the massive criticism aimed at Israel in Europe stems from, inter alia, a misunderstanding and an impatience toward this existential need of the Jewish Nation and the State of Israel. On the other hand, and much to my regret, Israel has a growing sense of impatience (when it comes to Europe). There are those who feel anger and frustration toward certain European actions, vis-à-vis what they perceive as sometimes unfair criticism, sometimes even contaminated by elements of condescension, and some would even say double standard."

He turned to the representatives of the European nations and asked them to consider with patience Israel's concerns, and respect Israel's democracy and sovereignty. He said, "My European friends, we cannot agree on everything. But as friends and as true allies, I call upon you and ask you, let us be patient. Please respect the Israeli considerations, even when different from your own. Respect Israeli sovereignty, and the democratic process of its decision-making. Respect Israel's staunch commitment, indeed its very duty, to protect its citizens. For us it is the most sacred commandment of all."

The president turned his attention to the need to find a solution to the conflict between Israel and the Palestinians. He spoke of the importance of building trust between the parties in order to create the right conditions for an agreement, and of the important role Europe could play in this vital process.

Speaking of Israel's willingness to reach a solution, the president said, "Ladies and gentlemen, I am standing here today and saying in no uncertain manner: from 1993, in which the Oslo Accords were signed, the elected Israeli leadership has been—and is—in support of the solution of 'two-states for two peoples'. Furthermore, being well versed in the Israeli Parliament, I do know that any political agreement brought before the Israeli Knesset by an elected government will be approved."

Reuven Rivlin and Martin Schulz (Photo: Mark Nieman, GPO)
He went on to stress that "With all the difficulty and pain involved, we must look at reality straight in the eye and tell the truth. Currently the practical conditions, the political and regional circumstances, which would enable us to reach a permanent agreement between us—the Israelis and the Palestinians—are failing to materialize."

The president then laid out what he saw as the obstacles to progress. He said, "First, in order to achieve a comprehensive permanent agreement, an effective leadership is required. However, the Palestinian leadership today is divided in—at least—two," and noted that "Hamas, which rules Gaza and is ideologically committed—in both its political and military leadership—to the annihilation of Israel."

He continued, "Second, in order to achieve a stable and viable agreement, a reasonable regional and economic infrastructure is required. But we are living in a reality where the plague of murderous Jihadi fundamentalism, religious fanaticism and incitement… Israel is devoting, and will continue to do so, vast efforts, more than any other actor in the region even at the price of complex security risk-taking—but Israeli intervention alone will not suffice."

The president spoke about the repeated failure of the approach of the international community, and the need to apply a new paradigm. He said, "I am afraid that for years the international community has been acting as a mediator between the parties based on one inflexible paradigm, that of striving to renew negotiations toward a permanent agreement. This paradigm draws to a dichotomy: 'Two states or a bi-national state', 'All or nothing', 'Here and now' or 'Nevermore'.

"It is by the way by virtue of that same paradigm that various European states opposed the peace agreement between Israel and Egypt, claiming that it does not provide a solution for the Israeli-Palestinian conflict. Had that concept been accepted then, imagine where we would be today. This paradigm relies on the assumption that the problem which is the crux of the matter in this bloody and painful conflict is simply the lack of good faith on both parts, and that if we only exert pressure on 'them', on 'us', they will adhere to a permanent agreement and to a state of peace." He continued, "However, as years go by and rounds of negotiations fail one by one, bringing in their wake, waves of murderous violence and terror, it seems that this assumption of a 'lack of good will' proves not only to be fundamentally erroneous, but to ignore the circumstances, the capabilities, and the present situation on the ground, which by definition would lead to the failure of any attempt to negotiate a permanent agreement."

He said emotionally, "I speak before you today in the name of the citizens of Israel, grandfathers and grandmothers, fathers and mothers, sick and tired of this bloody vicious cycle which soaks up the blood of our loved ones, the blood of our sons and daughters. I speak before you in the name of these young men and women who wish to live in their country, and not die in their homeland. I speak to you today in the name of a nation which abhors war and desires life and peace. And I must say, one cannot hope to achieve better results while resorting to the same outlooks and tools which have failed time after time previously."

The president spoke of the latest French Initiative which had been adopted by EU policy makers. He said, "The French initiative suffers from those very fundamental faults. The attempt to return to negotiations for negotiations' sake, not only does not bring us near the long-awaited solution, but rather drags us further away from it."

He stressed, "If the international community really wishes and truly aspires to be a constructive player, it must divert its efforts away from the renewal of negotiations for negotiations' sake, and toward building trust between the parties, and to creating the necessary terms for the success of negotiations in the future. In the current circumstances, we must all ask ourselves, 'What can be done today?' rather than, 'What cannot be done?'"

He continued, "And things can be done. This mission of creating the terms for a future agreement, creating an infrastructure for trust, and for a life of dignity for both peoples, demands of us today—the international community and Israel alike—to invest tremendous efforts in four main avenues."

The president set out the initiatives which needed to be pursued to bring progress. He called to cooperate with moderate regional powers, develop the Palestinian economy, invest in joint ventures, and improve education for peace.

The president reiterated Israel's appreciation of Europe's desire to see an end to the conflict, but noted "If Europe is interested in serving as a constructive factor in striving for a future agreement, it will be incumbent upon you ,its leaders, to focus efforts at this time in a patient and methodic building of trust. Not through divestments, but through investment; not by boycotts, but by cooperation."