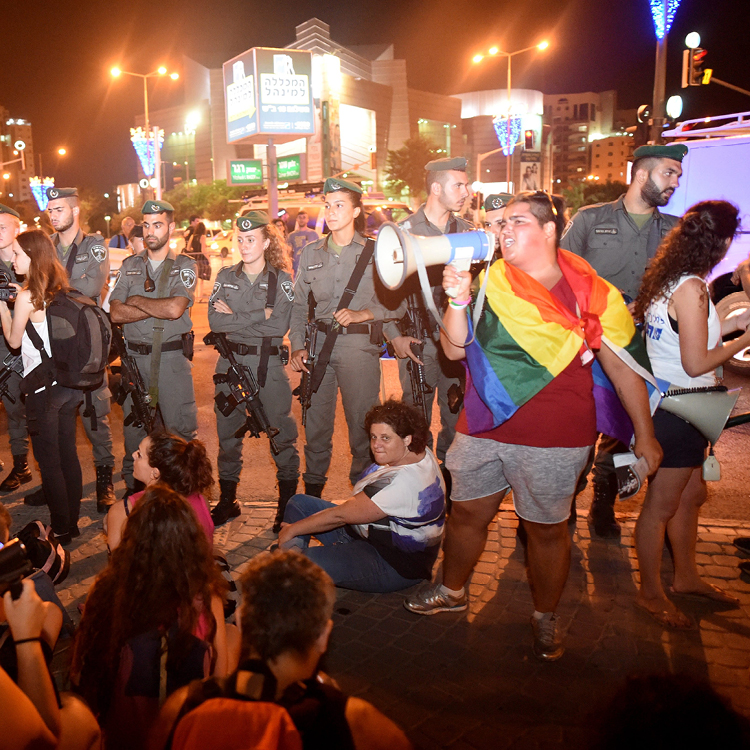 Not with a whimper, but with a bang

Op-ed: Since the ignorant comments from those opposing Be’er Sheva’s Pride march only managed to fuel the fire under Israel’s LGBT community, a thank you is in order from me and all my gay friends.

I haven’t felt my blood boil over anything gay-related for a really long time. I’ve been a lesbian for 54 years, plus an additional nine months in my mother’s womb. And yet it’s been years since I went to a Pride parade, and not just because of the heat. I thought it had become a non-issue.

Over the years, I have grown up, had children, given interviews, protested and watched as my country became a better place, so that the things we once did not dare to dream about were now being celebrated under the hot Israeli sun, on television, in film, on the street, in the media and really everywhere.

Protestors at Be'er Sheva's rally in front of City Hall
But nearly all the reports that followed one another regarding this week’s would-be Pride event in Be’er Sheva got to me. And so I packed up my 16-year-old daughter, who kept tagging me online in every post and article on this issue, and together we angrily sped down to Be’er Sheva to join the seething protest against the rabbinical institution, the inept police force, and the infuriating Supreme Court decision regarding the march.

This, of course, is the same Supreme Court that allowed Jewish Kahanist extremists to march through an Arab city, which is suddenly concerned over maintaining a good “balance” and over police intel now that the issue is gays and lesbians in the Negev city. It’s the same police force that manages to protect the monumental parades of Tel Aviv and Jerusalem but is incapable of securing a small march in a city run by religious wheelers and dealers.

A participant of the Be'er Shev protest (Photo: AP)
None of this is surprising in a country that manages to be both progressive and prejudiced. And it’s only been getting more extreme, with the homophobic opposition to Be’er Sheva’s Pride event rearing its head the same week that very disturbing quotes made by the IDF’s soon-to-be appointed Chief Rabbi Col. Eyal Karim come to light. How can anyone still not see that Jewish law should not decide on anything in a “progressive, Western democracy” like Israel? How can you—yes, you who constantly take offense due to religious beliefs—not understand that LGBTs will never again return to the darkness of the closet? Or that you will just have to get used to our existence, since there is no question that we are going to win this war? Our spirits suffer a blow when we arrive in Be’er Sheva. As Tel Avivians, we are used to massive parades, and we find it difficult to come to terms with the police’s fencing in of a small area in front of City Hall, where the colorful, singing protestors are caged. As more and more people join, though, a wave of optimism begins to grow, bolstered further by speeches and the songs being performed. There is real power here among the determined protestors, with quite a few religious people among the crowd. Speaking with some of the locals, I hear that Be’er had already held a small Pride march two years ago, which passed through the market and all of the city’s more “sensitive” areas without anyone commenting on it. A local reporter assures me that Be’er Sheva is a very tolerant city, and that nothing bad would have happened had we been allowed to march. The police’s feeble excuse of wishing to protect the safety of the participants was the result of a deal struck between it and City Hall. And if indeed specific threats were made, why are those being threatened expected to carry its burden and not those who doled out the threats? Despite all of this, though, I’m not very concerned. All the great revolutions started with an event like this one, from which there is no turning back. I am confident that Be’er Sheva’s Pride events will include a lot more participants in the upcoming years, waving flags of freedom and singing songs of love. Which is why I actually owe the city’s rabbi and all those who wag their tail in submission a debt of gratitude: You guys brought this protest a lot of publicity and respect. Kudos for that.