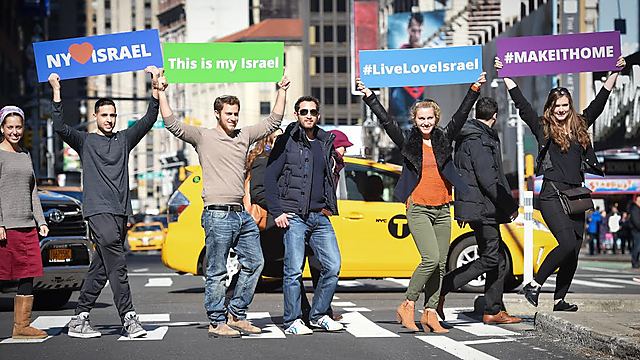 Relationship of younger generation of American Jews with Israel eroding

Op-ed: As the perception of Israel changes among young US Jews in light of its policies, it's going to become harder to mobilize in support of Israel as it fights international battles against BDS and attempts to isolate it.

The relationship between US Jewish youth and Israel presents serious concerns. The majority of the older Jewish community grew up with first-hand memories of the Holocaust, and still sees Israel as the center of Jewish life. Those Jews embrace Israel even when the country’s internal politics are not clear to them, when they have reservations about Israel's approach to State versus religion issues or when they are worried about its political decisions and actions.

This unwavering support, which has remained steadfast even in the face of political differences, viewpoints and style, relies heavily on the realization that the Israelis are the ones who shoulder the burden of sovereign Jewish existence and carry this responsibility in an immensely difficult environment.

Younger Jews see things differently. As they get older and enter college or the workforce, we are witnessing a historical transformation in the Jewish community’s relationship to Israel—one that takes place despite the positive impact of Israel-focused programs such as Birthright.

More than any other moment in history, young American Jews—contrary to their parents’ generation—are applying liberal and judgmental views to Israel. Millennials grew up when Israel was seen as a regional superpower equipped with nuclear weapons and a developed high-tech industry. Many believe that Israel fails to exhibit the creativity, generosity and flexibility expected of a superpower of its scale. Some news items make them believe that Israel is abandoning its democratic values and religious pluralism. These same young people donate to or volunteer in Greenpeace and Amnesty International—and they don’t understand why Israel criticizes human rights NGOs.

Many young American Jews are no longer convinced that the Palestinians are the only ones to blame for undermining the peace process. They fail to understand why Israel continues to expand and build settlements that are believed to thwart the hope for a two-state solution, and why the Arab peace initiative is received with cynicism and scorn. Military strength alone does not impress the younger generation of American Jews. They cherish wisdom, openness and respect of human beings whether they are Jews or non-Jews. While some of the values important to them are evident in Israel, they are becoming harder to notice and highlight.

Considering the prevailing mindset amongst their peers, the challenge to democratic values together with the stalemate to the peace process has made defending Israel on campuses difficult for many young American Jews. Instead, they seek and find different ways to express their Judaism—some associated with healing the world of its ills (Tikkun Olam) or spiritual awakening, many of which are less identified with the Jewish State. Unlike the older generation, they do not see the centrality of Israel in their Jewish lives.

Make no mistake: these young Jews are not becoming Palestinian sympathizers and/or supporters of de-legitimization. Instead, they are simply drifting away from Israel. When asked about it (and every Jew is asked about Israel) they sometimes criticize or even evade the conversation.

Israelis might be aware of these developments. Perhaps it is accepted as an unpleasant reality. Nevertheless, they need to know that they play a role in it and that the political and ideological choices they make have an impact on the changing reality of young people’s perception of Israel. We respect the rights of Israelis to make their own political choices, but as Zionists who love and support Israel, it is also our duty to voice our concerns and observations.

American Jews can play a significant role in meeting the challenges Israel faces—such as the attempts to isolate it, the de-legitimization campaign and the BDS. However, mobilizing younger American Jews will be extremely difficult if the current perception of Israeli policies and values continues to prevail. If the trends continue, we might enter an era when most of the Jewish community becomes a bystander, rather than participant in the Israeli story. This will be a tremendous loss for both communities.

The Israeli leadership needs to understand its role in unifying the Jewish Diaspora, to be attentive to understanding and take responsibility for the impact and consequences of their decisions. Failing to do so will leave us all on the losing side.

Amb. Ned. L. Siegel is the former US Ambassador to the Bahamas under President George W. Bush. Prior to his appointment as Ambassador, he served two other Presidential appointments: as the Senior Advisor to the US Mission and the United States Representative to the 61st Session of the United Nations General Assembly in New York, as well as serving on the Board of Directors of the Overseas Private Investment Corporation (OPIC). He currently serves as Chairman of the Yitzhak Rabin Foundation, a non-profit organization formed to perpetuate the values, vision and legacy of the late Prime Minister, Yitzhak Rabin.