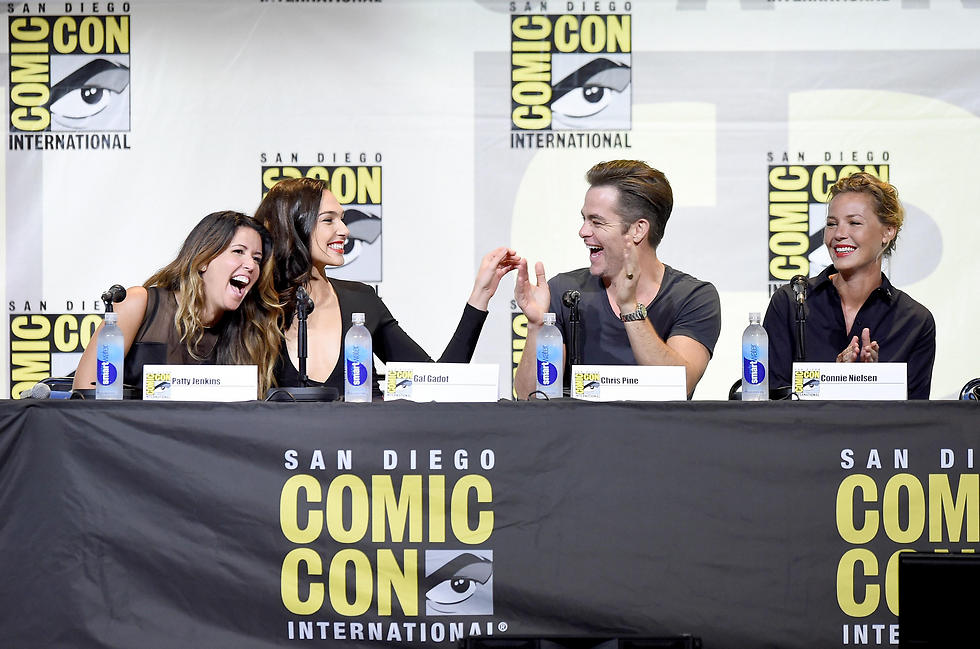 Crowd at Comic Con in San Diego gets a glimpse of Gadot's 'Wonder Woman,' as well as 'Justice League' in which she appears alongside Superman, Batman, The Flash, Aquaman and Cyborg; 'Wonder Woman has the heart of a human and the strength of a goddess and combination of the two is very powerful,' Gadot says.

The 6,500-some fans who crowded Hall H at San Diego's Comic-Con on Saturday got a glimpse of never-before-seen footage from the action-packed first trailer for "Wonder Woman," starring Israeli actress Gal Gadot, as well as the superhero all-star film "Justice League," in which Gadot also appears.

"Wonder Woman," directed by Patty Jenkins, highlights the romance and World War I-era adventure of Diana Prince's origins. The movie comes out in June of 2017 and will be the first time the iconic superhero has had her own film in her 75-year history.

The cast of "Wonder Woman" discussed exploring the origins of the Amazonian warrior heroine, and bringing a strong female lead to the male-dominated superhero movie world.

"Wonder Woman has the heart of a human and the strength of a goddess and combination of the two is very powerful," Gadot said, seated alongside co-stars Chris Pine and Connie Neilsen, who plays her mother. Audiences first met Gadot's Wonder Woman in "Batman v Superman" earlier this year.

"Knowing how many people care so much for this character ... it was important to portray (her) in a way everyone can relate," Gadot added.

The first poster for Wonder Woman.

Wonder Woman will join forces in the "Justice League" film with Batman (Ben Affleck), The Flash (Ezra Miller), Cyborg (Ray Fisher), Aquaman (Jason Momoa) and Superman (Henry Cavill), who, it was revealed Saturday, had survived the events that appeared to kill him in "Batman V Superman."

Director Zack Snyder and the cast flew in from London to tease "Justice League," which is currently in production and not set to hit theaters until November 2017.

The lively "Justice League" footage highlights Bruce Wayne's recruitment of what will be the Justice League team.

The lighter touch in the "Justice League" reel is likely a direct response to the widespread criticism of the self-seriousness of "Batman v Superman," and will be a pivotal moment for the studio in bringing together all of the personalities that they hope will also stand on their own, much like Marvel and Disney have done with "The Avengers."

Warner Bros. has 10 films pegged to the interconnected universe over the next few years including "Suicide Squad," which comes out next month, "Wonder Woman," ''Aquaman," ''The Flash," and the stand alone "Batman" film, which Affleck is directing and starring in.