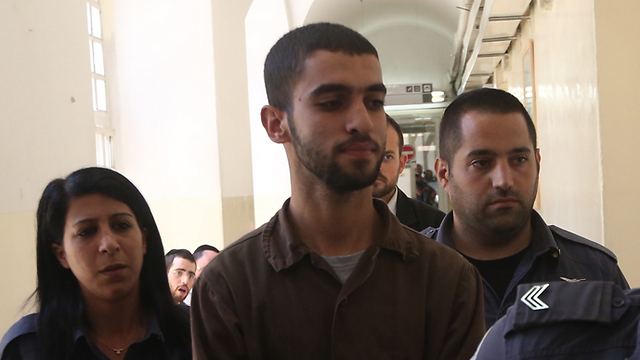 Ali Abu Hassan, 20, built the pipe bombs he planned to use in his attack on the light rail in the capital himself, and tested them before setting out to commit the attack; he was stopped by a vigilant security guard.

Ali Abu Hassan, 20, from the Hebron area, is the terrorist who was stopped while attempting to carry out a bombing on the Jerusalem light rail two weeks ago, it was cleared for publication on Tuesday.

Abu Hassan, a civil engineering student at the Polytechnic University in Hebron, made the pipe bombs he planned on using for the attack himself.

According to prosecutor's statement filed by police on Tuesday, Abu Hassan left a will at the university before setting out to commit the attack.

The pipe bombs Abu Hassan built (Photo: Police Spokesman)
The investigation also found that three days before the attempted attack, Abu Hassan crossed the Green Line where there is no separation fence. He got to Jerusalem, toured the city, and slept at the plantations in the Jabel Mukaber neighborhood.

While searching for a location to carry out his attack, he also entered a restaurant and considered setting off his bomb there, but eventually decided he could hurt more people by blowing it up inside a light rail car.

On July 17, near 9am, Abu Hassan arrived at the Jaffa Center stop, where he was observing passersby. It was then that he was spotted by a vigilant security guard who asked Abu Hassan to open his bag for inspection. The terrorist ignored the request, which led the security guard to restrain him by force while another guard took the bag.

Abu Hassan could not set off his bomb while he was questioned by the security guard because it could only be set off by lighting a fuse, which he could not do. While the fuse would have allowed Abu Hassan enough time to escape the explosion, he told interrogators he "didn't mind committing suicide." During his interrogation, Abu Hassan expressed regret for his actions. The court extended his remand until Friday, when he will be indicted for attempted murder.