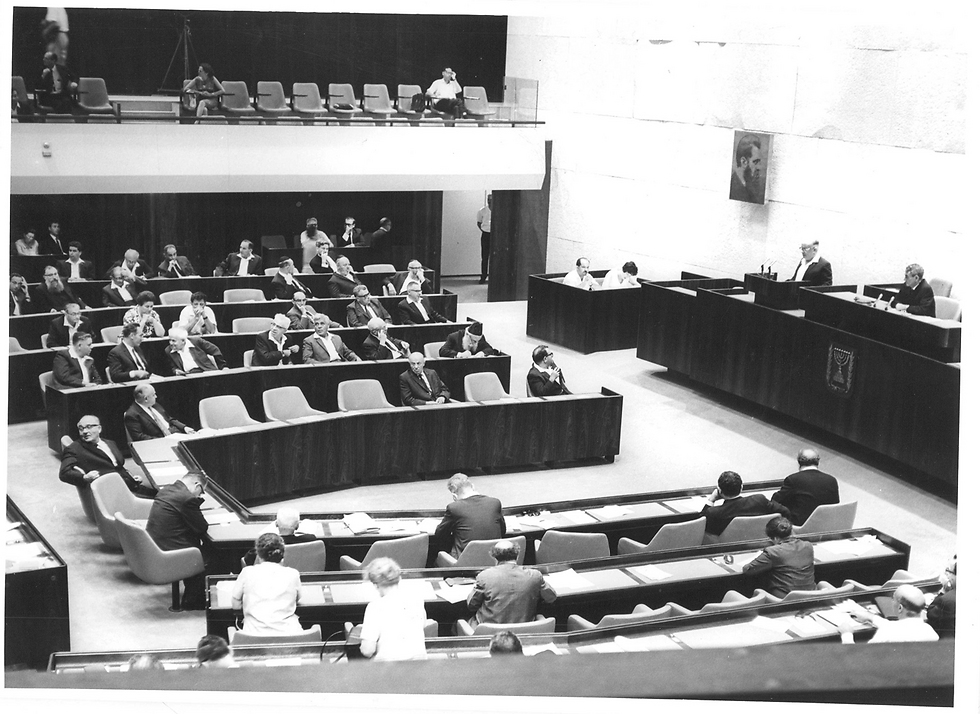 IN PICTURES: Knesset building inaugurated 50 years ago this month

Israel's parliament building was opened in 1966 in an impressive ceremony attended by thousands of people. Former president Shimon Peres, then a young MK, remembers: 'There was real excitement'; Ynetnews brings you rare photos from the event at Givat Ram and looks at the plenum then and now.

The Knesset building on Givat Ram in Jerusalem was inaugurated in a grand state ceremony 50 years ago this month. Some 6,000 guests, including heads of state, came to the ceremony, while some 5,000 Israelis watched it from the hills across from the legislature.

The Knesset as a legislative body began operating in 1949, and it travelled between a few buildings in Jerusalem and Tel Aviv at that time. In 1950, it met in Frumin House in the heart of Jerusalem. This 'temporary' house served the legislature for 16 years, thanks to delays in construction of the Givat Ram site.

Fifty years ago, the former president Shimon Peres was a young MK. He recalled the ceremony with pride to Ynet: "The inauguration of the Knesset building was a holiday for the country and a moving event for the entire nation. The day that the building was inaugurated was the day that the young State of Israel adopted the real democratic system."

Peres also said, "There was a real excitement and elation, similar to the day that the UN announced the decision to establish the State of Israel. Here, we launched the democratic foundation of the state. It was elation and a sense of the historic moment that we were laying the infrastructure for the democratic future of the young State of Israel."

In 1957, the architect Ossip Klarwein won a competition to design the Givat Ram building. However, the building that ended up being inaugurated was completely different from his plans, instead being a blend of various architects who changed during the nine years of the building's planning and construction. The building was inaugurated on August 30, 1966, and the very next day, the MKs met therein.

The then-speaker of the Knesset, Kadish Luz, said at the time, "Here, on this hill of the hills of Jerusalem, the capital, we inaugurate the permanent home of the Knesset. Marking 18 years of the State of Israel, a home has been given to the highest institution, the source of all authority, rule and law in Israel. We have fulfilled ancient prophecies. Faith in the future return to Zion, recognition of the national unity of the tribes of Israel, and adherence to the spiritual assets that the Jewish nation has carried for thousands of years of dispersion throughout the world were the principal spiritual cause for its revival and thriving." The prime minister of the day, Levi Eshkol, said at the ceremony, "This building, which will house inside it the country's legislature, constitutes a symbol of the rebirth of Israel in its land, a sign of the renewal of its sovereignty, and a testimony to its mind for developed democracy. Democracy in Israel took shape in difficult times, times of trial, days of crises and state, military, economic and social challenges. It took shape in a bitter struggle against hostility, threats and attacks from outside." He added, "On the anvil of the Knesset will be forged the people's national unity; between its walls will form the wonderful union of children returned to their borders after the terrible destruction that befell them. Here will be unified Israel, which carried its pack on its eternal wanderings, its culture and its hope for other days, with which its existence was fought for, despite its dispersion and incessant pain, fought for and attained. "In looking to this supreme institution, the nation in Israel and in the Diaspora will know that there is a payoff for its work, and not in vain were its struggle for existence and longing for redemption throughout the generations."