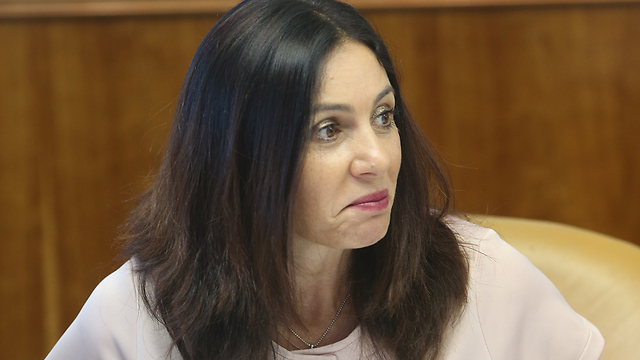 Op-ed: The culture and sport minister has come out to strongly condemn the Lebanese Olympic team's refusal to share a bus with Israelis; good on her! Sure, she didn't actually say anything when they were trying to segregate West Bank buses in 2015, but now that she's on board, she's welcome to comment on segregated roads on which little girls have their bikes stolen.

Nobody could accuse me of being overly fond of Culture and Sport Minister Miri Regev, but when she's right, she's right. So I was happy to hear that the minister was outraged by "the nationalist-racial segregation on buses," as she put it, following the Lebanese Olympic team's refusal to travel with the Israeli delegation. "All of us have the responsibility to keep the topic on the agenda until the end of loathsome phenomena like that," said Regev, adding, "Silence at such events like this reinforces the delegitimization against Israeli athletes."

She's right. Racial segregation on buses is an intolerable practice. We're not the 50s, when Rosa Parks refused to give up her seat on a bus to a white man, and this must not be skipped on the agenda. Precisely because of this, I was retroactively surprised by the minister's silence in May 2015, when the then-minister of Defense, Moshe Ya'alon, launched a pilot program that was supposed to segregate between Palestinians and Jews in public transit in the West Bank. This was following the demand of settlers, including MK Moti Yogev. The Bayit-Yehudi parliamentarian then declared that travel was "intolerable; the buses are full of Arabs."

Miri Regev (Photo: Alex Kolomoisky)
The pilot raised public ire, including criticism from President Reuven Rivlin, who was appalled by the idea of segregation. Only Regev was silent. Granted, she had just been appointed to head the Ministry of Culture and Sport—which is to say that it wasn't under her purview. But as we all well know, when she has something to say, she says it, even if it's not connected to her, as we saw with the Biton Commission. Anybody who might have asked Regev then might have heard from her that the settlers' demand for segregation had good reasons: a justified fear, or at least understandable resentment. Just that if we're dealing with justified resentment, we can bring up the shared and bloody history of Israel and Lebanon, including, inter alia, intervention in internal Lebanese affairs, a military invasion "up to 40 km only," and more than 20 years in "the Lebanese mud," with bonuses like setting up the South Lebanon Army, making countless Lebanese refugees, and the hits: "the Sabra and Shatila massacre" (in Hebrew: We didn't know), and "the Qana massacre" (in Hebrew: an operational malfunction). In other words, there's a possibility that the Lebanese also have reasons for resentment. By the way, this resentment is not directed at Jews, but at Israel, so we're not talking about anti-Semitism here or about racial segregation. But never mind. I'm just happy that Regev is publicly coming out against unacceptable practices like this. Because the Olympic Committee already dealt with the Lebanese-delegation issue without her help, I recommend that her Excellency continue her important struggle against racial segregation and come with similar vigor even when it happens in her home. For example, regarding Jewish-only roads, like the one on which a Border Policeman took 8-year-old Anwar Burqan's bicycle a week ago. How did they put it in the Talmud? Set yourself straight before setting others straight. After all, silence on issues like this reinforces delegitimization not only against Israeli athletes, Minister Regev, but also against Israel itself.