The site of a vehicle-related accident
Photo: Avishag Shaar Yeshuv 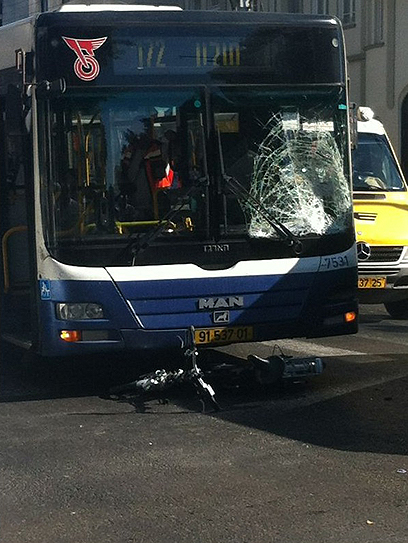 The unbearable lightness of negligence on Israel's road

Dear everyone voted into office: it's your job to look out for us when we're out on the road, so please, do what is needed to protect us all.

Dear Prime Minister Benjamin Netanyahu, you talk a lot about security challenges, your obligations to the security of the citizens of Israel and your high sensitivity to human life, but the truth is that these statements that come from you and your government are empty ones. A smokescreen. In practice, this government doesn't care for human life—it scorns it. How many citizens have been killed in the past year in terrorist attacks? About 40. A heavy and painful price. The government has rightfully mobilized a great amount of resources to cope with this, investing huge sums in intelligence, police, military, PR and other assessments.

The site of a vehicle-related accident (Photo: Rotem Shai)

And how many citizens were killed in vehicle-related accidents during the same period? About 300. Nearly eightfold. In view of this widespread and indiscriminate carnage, has the government allocated sufficient funds to fight against such an enormous loss of human life?

The shameful answer is no. The government is well aware that the carnage on the road is not an act of fate, but rather an outrageous failure that could be avoided using available means. Western countries that implement national programs to fight road accidents have managed to drastically reduce the number of road deaths, thereby proving this point with every passing day. But the government holds fast in its stubborn refusal, and it distracts the public with cheap tricks from the daily failure taking place on the country's roads.

Consecutive years of brutal budget cuts in enforcement (70% of the budget was cut in seven years) have made the Israeli roads a lawless land, where might makes right. The criminal Israeli driver doesn't fear law enforcement on the roads, and for good reason: there aren't enough police officers around because the size of the Police Force was cut by about 40%; there aren't enough patrol cars because their number was also slashed, by 63%; there aren't enough speed enforcement cameras at intersections and the dangerous areas with the highest number of casualties because only 60 out of 300 of these cameras have been installed, i.e., a mere fifth of the original plan; there aren't drunk-driving checks because there aren't enough breathalyzers; there isn't a functioning judicial system because the load on the traffic courts has created delays that go on for years. In short, there is no justice. As a result, Israel is one of the only Western countries in which the number of traffic fatalities is increasing every year, instead of reducing.

Dear Minister of Transport and Road Safety Israel Katz, along with impressive accomplishments in the development of road infrastructures, trains and ports, you have failed as the minister in charge or road safety, as it is your legal responsibility to minimize the amount of traffic-related deaths.

Dear Minister of Internal Affairs Gilad Erdan, in addition to the promise and partial execution in the form of increasing the number of police patrols vehicles and student police officers, you must remember that this promise has yet to be fully realized.

Dear Minister of Justice Ayelet Shaked, even the paltry amount of speed enforcement cameras that have been installed are not being used to their full potential, due to the substantial lack in traffic judges. Distinguished MKs, on average there is one traffic-related death a day, so please, on this issue put aside any partisanship and utilize all the influence and deterrence you can muster for the government to function properly. There have been many flattering international comparisons that have found Israel to be an accomplished leader in a variety of fields, and the government is right to take pride in this. It is only in road safety that Israel lags behind, resulting in the drawing of blood, so much of which is lost on the road. And the reason for this? It is because those killed from vehicle-related accidents don't have a lobby to fight for them, or any political power for that matter. It is because in this regard, every family is left to its own catastrophe and pain.