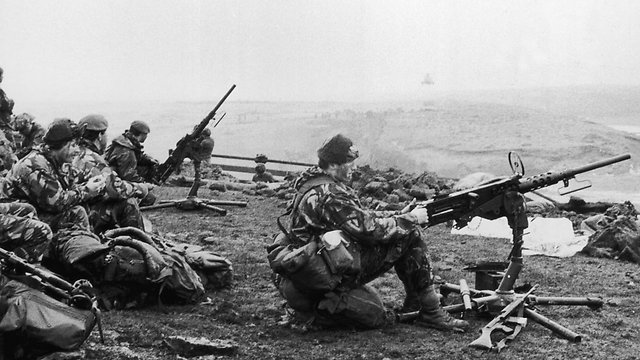 According to documents released by the British Foreign Office, Israel supplied weapons to Argentina during that country's war to regain control over the Falkland Islands; despite the British foreign minister personally intervening to stop the sale, it is believed that the weapons went to Argentina due to a longstanding grudge between Menachem Begin and the UK.

London — Secret documents recently declassified by the British Foreign and Commonwealth Office from the 1980s shed light on Israeli involvement in the Falklands War in 1982. According to the document, Israel supplied fighter jets and other weapons to Argentina's military junta at the height of the war with Britain. The Falklands War in 1982 was the height of the struggle between Britain and Argentina over sovereignty of islands situated in the Argentine sea in the South Atlantic. The fight between the two countries had roots in the British control of the Islands in 1833. In April 1982 Argentina invaded the islands but was was defeated two months later by British forces who consolidated their control. During the war, Israel Skyhawk jets to Argentina which were used to bomb British warships killing dozens of soldiers and sailors. One of the ships that was bombed by the Israeli-supplied fighter jets was the ‘RFA Sir Galahad’, which was set ablaze killing 48 people, marking one of the most traumatic episodes in the British experience of the war.

British soldiers during the Falkland War (Photo: Getty Images)
The documents reveal that Israel sent fighter planes and weapons to Buenos Aires in secret using cargo planes which flew via Peru. It has also been revealed that Israel continued to give Argentina weapons even after the war, when the Argentine government thought about trying to take the islands once more.

It was further uncovered that an Israeli sale of spy planes to Argentina was cancelled at the request of the British. The British foreign minister at the time, Sir Geoffrey Howe, personally went to Israeli officials to request the sale be cancelled.

Israel denied that it ever sold fighter jets to Argentina at first, but British soldiers who occupied the islands reported encountering Israeli made weapons on the islands. It was only two years after the war ended that Israel admitted to supplying the Argentines with weapons. According to the released documents, Israel sold these weapons to Argentina to help boost its weapons industry and noted that the British also sold weapons to Arab states during their wars against the Jewish state.

The British claim that the reason the arms sales to Argentina went through was because the Israeli prime minister at the time, Menachem Begin, still held a grudge against the British dating back to the Mandate period.