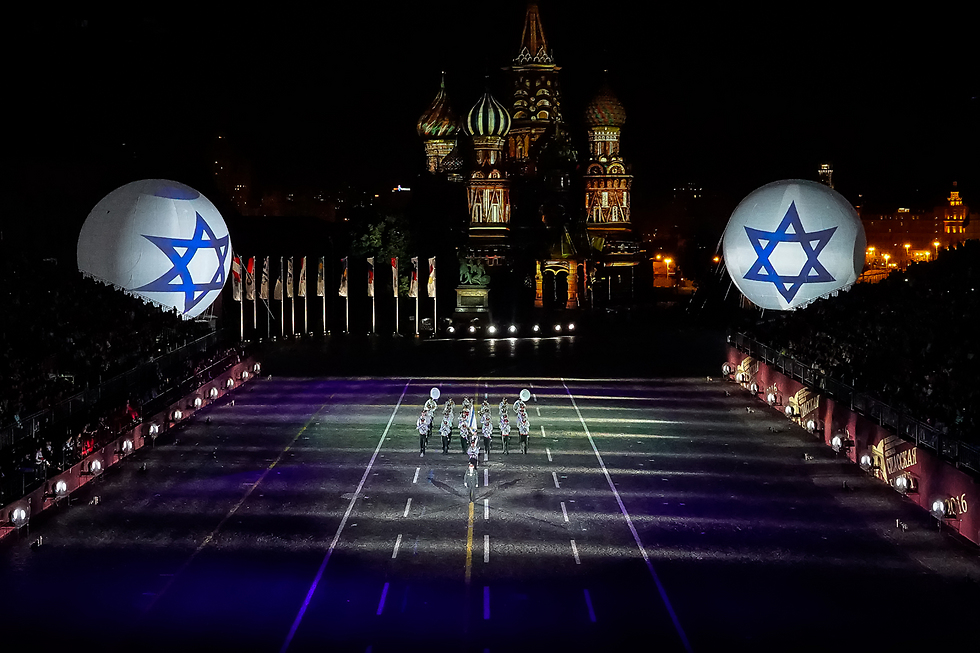 IDF Orchestra takes part in international festival for military bands in addition to marking 25 years of renewed relations between Israel and Russia; 'Performing in Moscow is the peak of the orchestra. Music connects people and countries.'

Red Square in Moscow was lit with large Stars of David and decorated with Israeli flags in honor of the IDF Orchestra, which took part in the international military orchestra festival this week in the famous square.

In addition to the IDF Orchestra, Israeli ambassador to Russia, Zvi Heifetz, and military attaché, Col. Zafrir Orpaz, also participated in the ceremony to mark the 25th anniversary of the renewal of relations between Israel and Russia. Heifetz said, "It is exciting to see the IDF Orchestra perform in Red Square, decorated with huge white and blue banners."

Lt. Col. Oded Nahari, the head of ceremonies of the IDF, noted that the IDF Orchestra is made of conscripted soldiers and professional musicians.

The orchestra played traditional military marches, several of which were originally from Russia. In addition, the orchestra also played "If I Were a Rich Man," "Hava Nagila" and "Shalom Aleichem." All the songs were played while conducting close order drills and marching formations.

Soldiers serving in the orchestra learned music prior to their conscription and had to pass auditions in order to be accepted. Conductor and director of the IDF Orchestra is Major Noam Inbar, who also served his required service in the orchestra. Maj. Inbar added, "Performing in Moscow is the peak of the orchestra. Music connects people and countries."