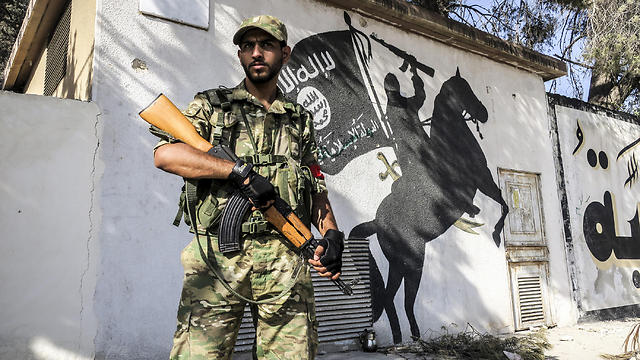 The residents of Jarablus are trying to piece their lives back together after being liberated from three years of terror under ISIS by the Turkish military; however, Jarablus has a long way to go before it returns to normalcy.

JARABLUS- The silhouette of an ISIS fighter on a rearing horse, a black flag in his hand and a saber by his side is among the disappearing traces of the jihadists' grip on this Syrian border town a week after Turkish-backed rebels swept in.

Murals scrawled on walls by the ultra-hardline Islamists who ran Jarablus for three years are gradually being covered with blue paint.

Children play again in dusty streets, their hair matted with sweat and dirt, while women hang laundry outside buildings on the edge of

town, some of them half-destroyed.

"It is ecstasy," said Husyein Kakmaz, 46, a Jarablus resident who made his living as a driver before ISIS seized the town, nestled in hazelnut and olive groves on the border with Turkey.

"Life was not life. There were so many prohibitions, no smoking, women couldn't show their faces," he said, speaking Turkish and describing life under the jihadist group.

Syrian rebels, mostly Arab and Turkmen, swept into Jarablus last Wednesday in an incursion backed by Turkish special forces, tanks and jets, an operation meant to drive ISIS from the town and surrounding territory and to prevent Kurdish militia fighters from seizing control in their wake.

A week on, there is little sign of the Turkish military presence. Syrian rebel fighters, some in camouflage fatigues and sandals, others in civilian clothes, are the ones in control, patrolling on motorbikes and in flat-bed Toyota trucks.

Celebratory gunfire rang out as some of the young rebels shot into the air and flashed victory signs, wanting their pictures taken and showing off for a gaggle of mostly Turkish TV cameras on a visit facilitated by the Turkish government.

The rebels and their Turkish backers announced they were in control of Jarablus within hours of mounting their operation last week, but the town still sits on the edge of a highly active war zone. Three Turkish soldiers were wounded on Tuesday after their tank came under fire west of Jarablus.

Yasin Darvish, a doctor in a small, dingy clinic, said the jihadists had taken everything as they fled, leaving barely enough supplies to treat the wounded. Food and medical aid have been brought in from Turkey.

"They took every piece of equipment so the hospital is empty. There are just emergency supplies and not even an X-ray machine," he said, adding 30 patients had been brought in on Wednesday alone, some with injuries from landmines.

"They even took the oven."

Bread and drinkable water are in short supply in the once-thriving trading town and there is little sign of commercial life. Children burned a pile of rubbish on a street corner under the blistering heat.

"There's no bread, no electricity, because they took everything when they fled. They took the generators," said one resident, Adil, 47, who had worked as a lawyer before the war.

"There was one oven in the bakery and they even took that," he said. Residents were afraid to draw water from the Euphrates river on the town's eastern fringe, he said, because the jihadists had laid landmines there.

Jarablus sits on the northeastern edge of a rectangle of Syrian territory some 80 km (50 miles) long, seized by Islamic State as it carved its self-declared caliphate out of a swathe of Syria and Iraq.

Turkey and the United States have long hoped that by sweeping Islamic State from this border zone, they can deprive it of a smuggling route which has seen its ranks swollen with foreign fighters and its coffers boosted by illicit trade.

Turkish President Tayyip Erdogan's spokesman said on Wednesday the aim of the military incursion, dubbed "Operation Euphrates Shield", was to "cleanse" the strip of territory of all militant groups and threats to Turkish security.

But this is a complex corner of Syria's five-year war.

Just to the east, over the Euphrates, lies territory controlled by a US-backed Kurdish militia also fighting the jihadists, but seen by Turkey as a hostile force, an extension of militants who have fought a three-decade insurgency for Kurdish autonomy in southeastern Turkey.

Turkish forces have clashed with Kurdish fighters as they push deeper into Syria south of Jarablus, meaning the town and its surroundings remain on the edge of an active frontline.

"I am not against the Kurds, they are good guys, they give us cigarettes," said Adil, adding Kurdish fighters had come within a few kilometres south of the town.

"Big countries are fighting. We are just the people under their boots."