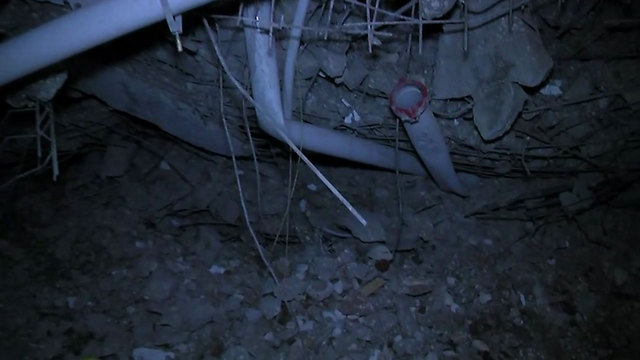 Rescue workers continue the search for five missing people into the night after a parking structure under construction collapsed Monday morning, killing at least two people, in the Ramat Hahayal neighborhood; others were recovered earlier from beneath the rubble.

Rescue teams are in a battle against time as they frantically continued to search for five missing people who have been trapped throughout Monday after an under-construction parking structure in the Tel Aviv neighborhood of Ramat Hahayal collapsed, killing at least two and injuring over 20.

Two of the people who remain trapped inside the ruins were contacted earlier in the day, but have since lost contact. These two, in addition to three other missing persons with whom there has been no communication at all, are feared to be in severe danger.

Resuce teams hear shouting from beneath the rubble
X

Resuce teams hear shouting from beneath the rubble

After two people were recovered earlier from beneath the rubble during daylight, rescuers are now using spotlights in their search as they are forced to contend with the darkness.

Prime Minister Benjamin Netanyahu came to the scene of the incident, having cancelled his previous plans to attend the soccer game between the Israeli and Italian national teams which took place Monday night.

Netanyahu is set to visit The Netherlands on Tuesday, and went to inspect the Ramat Hahayal site before his departure. In a statement, the PM expressed hope, "That the missing people will be found alive." He praised the rescuers and their efforts.

Col. Itzik Guy, head of planning in the IDF Home Front Command, gave details to the press of the rescue work being done in the area. "We are placing lights (in the area) because we understand that this will take another several hours and we will continue rescue efforts into the night. We still have not reached several (people who are) physically stranded, and we hope they are alive. This is a complex situation, and the area is very dynamic, and it could take a long time," he said.

About 310 Home Front Command soldiers from two different search-and-rescue units, as well as a team from Oketz (the IDF's special forces canine unit) are at the scene, and have so far rescued five people, but five others are still missing. About 160 firefighters have operated at the scene since the collapse.

In addition, large numbers of Magen David Adom (MDA) personnel are at the scene, as well as several ambulances. According to the IDF, Oketz dogs were instrumental in locating the two missing people who later lost contact with rescuers. Forces know their approximate location but have yet to physically reach them. An Oketz dog had earlier indicated the probable location of a third missing person, but he has not yet been reached either.