May and Taylor arriving in Israel
Photo: Avi Mualem 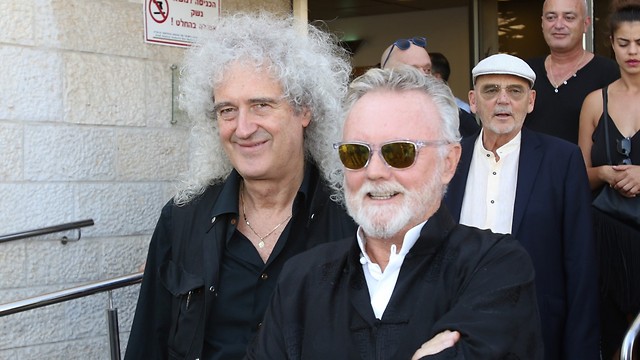 Ahead of their gig at Yarkon Park on Monday night, the British band and American singer went to dinner in Herzliya; the setlist will include some of the band's all time greatest hits, as well as some of Lambert's songs.

Queen guitar player Brian May and drummer Roger Taylor landed in Israel on Sunday afternoon ahead of their concert with Adam Lambert on Monday evening at Tel Aviv's Yarkon Park.

Lambert himself landed earlier in the day. He was joined by May and Taylor at Ilan Trigger's NAMMOS restaurant in Herzliya for dinner.

Brian May and Roger Taylor arrive in Israel
X

Brian May and Roger Taylor arrive in Israel

Queen and Lambert first joined forces in 2009, when May and Taylor served as mentors on American Idol's eighth season. Lambert, one of the competitors on the show, performed Queen's "Bohemian Rhapsody" on his audition for the show and ended up finishing second.

May and Taylor arrive in Israel (Photo: Avi Mualem)
May and Taylor were impressed by Lambert and performed "We Are The Champions" with him at a later stage of the show.

Lambert then went on to launch his career, seeing some success. In November 2011, he performed with Queen again at the MTV Awards in Belfast.

In June 2012, Lambert and Queen performed a full concert together for the first time and he has since been performing with the band.

Lambert (second from left), Taylor and May (in the middle) out for dinner in Israel.
Concert goers can expect the American singer and the British band to perform Queen's all-time greatest hits alongside some of Lambert's songs.