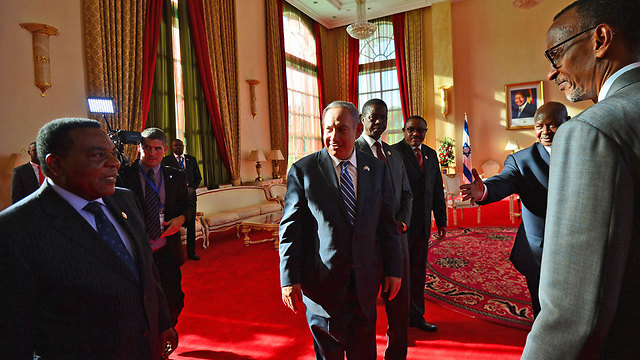 The Israeli return to Africa

Analysis: Prime Minister Netanyahu's recent visit to Uganda, Kenya, Ethiopia and Rwanda was the highlight of diplomatic activity aimed at curbing Iranian influence on the continent, expanding trade ties and persuading African states not to vote against Israel in international organizations.

Prime Minister Netanyahu in a meeting with African leaders in Entebbe, Uganda (Photo: Kobi Gideon, GPO)
After the agreement was signed, Foreign Ministry Director-General Dore Gold visited Guinea on August 21 and met with the country's president, Professor Alpha Condé, and with 10 of his ministers. They discussed cooperation in different fields and agreed to complete the ambassadors' appointment process. At the end of his visit to Guinea, Gold paid a rare visit on August 22 to a Muslim African state with which Israel has no diplomatic relations and met with senior officials there. Before this, on July 14, he visited Chad and discussed the renewal of diplomatic relations with Israel with its president, Idriss Déby. So far, the relations have not been restored.

The main goals of the extensive Israeli diplomatic activity in Africa are: An attempt to change the African states' voting patterns at the UN, the African Union, and other international forums, as so far most African states continue to vote in favor of pro-Arab resolutions despite the fact that they have good bilateral relations with Israel; an attempt to win observer's status or, at least, the status of an invited guest at the African Union; to expand trade relations between the State of Israel and African states; to aid African states in areas in which Israel has experience, such as agriculture, development, security and counterterrorism; and to curb the Iranian influence in Africa. At the moment, the State of Israel appears to be partially successful in reaching its objectives in Africa.

For now, the Iranian influence has been curbed in some states in the Horn of Africa and in Eastern Africa, and the route of Iranian arms shipments to Hamas – which passes through the Red Sea and Sudan to Egypt and from there to the Gaza Strip – has been blocked.

As a result of this activity, it is quite possible that other African states will change their voting patterns at the UN by abstaining in votes on pro-Arab resolutions on Middle Eastern issues, or distance themselves from them – as Nigeria did at the Security Council vote on December 31, 2014, when it moved from supporting a Palestinian proposal to abstaining.

An observer status at the African Union?

Nonetheless, the main challenge facing the State of Israel is its repeated attempts to gain observer status at the African Union. During Netanyahu's visit to Africa, it was reported that Algeria and Sudan had worked to thwart his visit to the African Union headquarters in Addis Ababa, although he had no plans to visit the place. South African objected to it too.

This is the result of attempts made by the Palestinians and Arab states to curb Israel's activity in Africa, including its attempts to gain observer status at the European Union. The Palestinian Liberation Organization (PLO) received observer status at the African Union in 1974, when African states turned the Palestinian problem into an African problem. So after Israel and the PLO signed the Oslo Agreements in September 1993, African states – including Muslim ones – restored their ties with Israel. But some of those states, such as Niger and Mauritania, cut their ties with Israel again following the deterioration in Israel's relations with the Palestinians.

In the past, Egypt also played an important role in the attempt to limit Israel's steps in Africa, but today, in light of its budding relationship with Israel, which has warmed up in the three years of Abdel Fattah al-Sisi's rule, and in light of the many internal challenging faced by Egypt, it seems to prefer to keep a low profile and not disrupt Israel's reentry into the continent.

Due to the centrality of the Palestinian problem in African states, it's very likely that in the event of progress in the Israeli-Palestinian process, Israel would also be able to gain an observer status at the African Union alongside the PLO and almost fully implement the targets of its reentrance into the continent.

Dr. Moshe Terdiman is the founder and director of the Research of Islam and Muslims in Africa (RIMA) and Green Africa Consultancy. This is a shortened version of a study written for Mitvim – the Israeli Institute for Regional Foreign Policies.