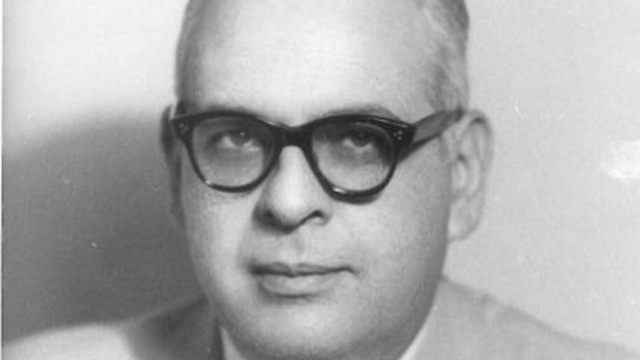 This is not an Israeli ambassador: Magritte painting worth millions

A Belgian art dealer arrived at the Israeli embassy in Brussels with an interesting story: A painting by Rene Magritte, famous 20th century surrealist artist, depicting former Israeli ambassador to Belgium, Amiel Najar, would be put up for sale at a price of no less than 4.8 million euros. The dealer decided to inform the embassy because 'it is a matter of respect between two countries.'

A Belgian art dealer has offered a rare René Magritte painting—one of the greatest artists of the 20th century—for €4.8 million. The painting was a gift to Israel's ambassador to Belgium in the 1960s, Amiel Najar, whose likeness was incorporated into the painting itself.

Amiel Najar was born in Cairo on September 6, 1912; and immigrated to Israel in 1948. That same year, he was hired by the Israeli foreign service and went on to become a senior diplomat, eventually becoming Israel's ambassador to Belgium from 1960–1968. It was during this period that Najar became friends with Magritte, the prominent surrealist painter.

During his stay in Brussels, in 1965, Najar asked his friend Magritte for a painting for himself. Magritte produced a work called Le Discours de la méthode ("discourse on the method," after the famous essay by Descartes). In the painting, Magritte combined the features of Najar in the surreal style he was known for. In 1967, after the death of Magritte, the Najar family sold the painting, and it floated between different art collectors in Europe.

Discours de la methode by Rene Magritte
Several days ago, an art dealer came to the Israeli embassy in Brussels and informed personnel that the painting would once more be up for sale at a price of €4.8 million . The dealer explained that he informed the embassy because "it is a matter of respect between two countries," and invited an embassy representative to the sale. The dealer also presented a rare photo showing Magritte painting Najar.