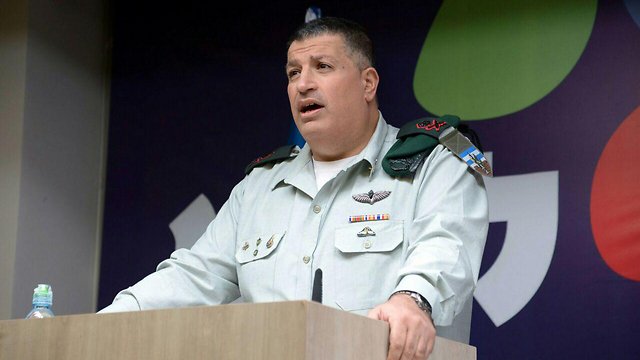 The remains of one of the most notorious Palestinian terrorist were refused entry on the orders of COGAT commander Maj. Gen. Yoav Mordechai; Abu Jihad was responsible for numerous attacks that killed dozens of Israelis.

The remains of Abu Jihad, the former deputy to Yasser Arafat head of the armed wing of Fatah who was assassinated by Israel in 1988, will not be transferred to Palestinian Authority territory for burial. Head of the Coordination for Government Activities in the Territories (COGAT), Maj. Gen. Yoav Mordechai made the decision final on Tuesday.

The Palestinian Authority made the request to transfer the remains after the cemetery in the Yarmouk refugee camp in Damascus - where Abu Jihad is buried - was destroyed by ISIS.

Abu Jihad, who is also known as Khalil Ibrahim al-Wazir, was born in 1935 in the city of Ramla, between Jerusalem and Jaffa.  His family relocated to Gaza following the War of Independence. Abu Jihad was studying at Alexandria University in Egypt where he became friendly with a young Yasser Arafat in the 1950s. The two would later found the Fatah movement. He would lthen ater become one of the chief architects of attacks against Israel, orchestrating the Savoy hotel attack in March 1975 and the coastal road massacre in March 1978.

Abu Jihad's wife, Intissar al-Wazir, was also active in Fatah and was the manager of a fund which supported the families of those killed in operations against Israel. Their eldest son was murdered by Syrian intelligence in Damascus in 1976 as a result of disagreements between Abu Jihad and the local government.

Abu Jihad wandered among the capitals of Arab countries who agreed to host him for most of his life. He lived in Damascus until the murder of his son, and then moved to Beirut, which he left for Amman in 1982 following the IDF invasion of Lebanon. He eventually settled in Tunis with the rest of the PLO's leadership after being deported by Jordan in 1986.

On the night of April 16, 1988, Abu Jihad was assassinated by Israeli commandos at his home in Tunis. According to sources, the assassination was carried out by the elite IDF units Sayeret Matkal and Shayetet 13 in concert with the Mossad. The assassination of Abu Jihad badly hurt Fatah's relations with other organizations and their ability to organize attacks against Israel.