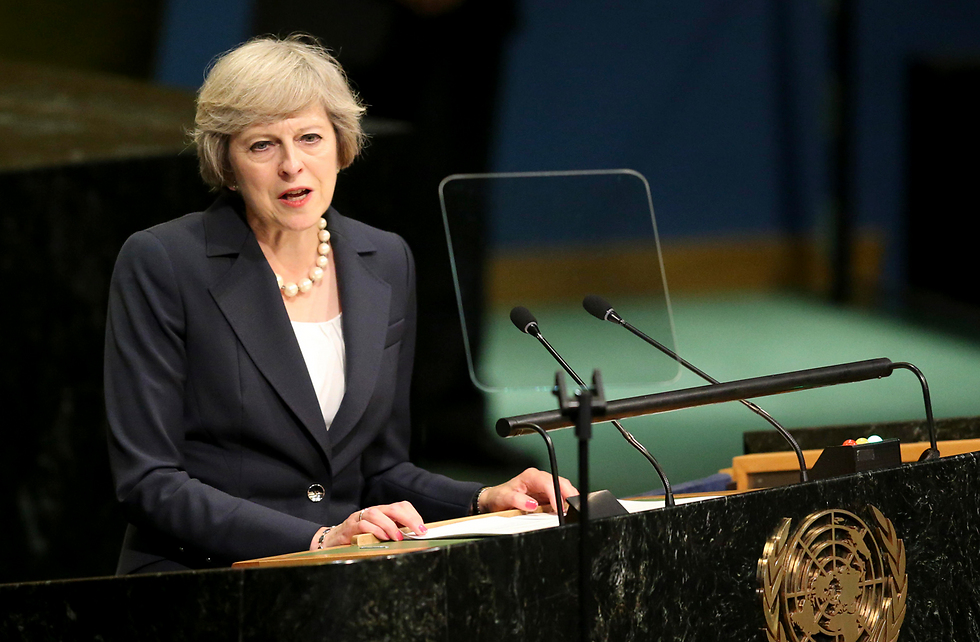 Is Theresa May Britain’s most pro-Israel prime minister?

Op-ed: British Prime Minister Theresa May used her first day in office to eat dinner at the Chief Rabbi of Britian's house, and has a proven track record of turning MI6's connection with Israeli intelligence agencies into a strategic asset; May: 'without its Jews, Britain would not be Britain.'

Three months ago, in her first day on the job as the prime minister of Britain, Theresa May decided to go on a dinner scheduled months prior. In the early evening hours, the prime minister and her husband Philip left 10 Downing Street with their motorcade and made their way to a house in north London to dine with Britain's Chief Rabbi Ephraim Mirvis. Only hours earlier, May was kissing hands at Buckingham Palace, becoming the second female prime minister in Britain's history and the talk of the day. But a commitment must be kept, and May, known as a lady of her word, was sending a message that despite her new high-ranked job—she has no plans of changing. In the presence of a handful of participants, the May couple had a strictly kosher dinner at the home of Rabbi Mirvis, with whom May has warm relations. The dinner was scheduled three months prior, when May was still the Home Secretary. No one could have imagined that one referendum could cause such a storm in Britain, leading to the resignation of the prime minister and the appointment of a woman considered a not particularly distinguished minister to one of the most important jobs in the world.

British Prime Minister Theresa May at the UN (Photo: AP)

For a few hours, May put aside the arduous and complicated task of forming her government in favor of that dinner.

"The fact she made it to dinner at the height of the preparations and before taking the reins of such an important job, reflects her great desire to maintain her commitments to and appreciation of Britain's Jewish community," Rabbi Mirvis said. May's close ties with the Jewish community in Britain are not new. In her six years as the Home Secretary—a position that tasks her with the responsibility of Britain's internal security—May was personally involved in the security of Jewish institutions in the kingdom, particularly in light of the country's rising anti-Semitism. May becoming prime minister is very good news for Israel. In fact, there are already some in Britain who have dubbed her the most pro-Israeli prime minister 10 Downing Street has ever seen. Even if May won't support the expansion of settlements or break away from the international position on Israel's presence in the disputed territories, it is safe to assume that she would continue taking a pro-Israeli stance and defend Israel whenever an occasion for such statements arises. May knows Israel well. Two years ago, shortly before Operation Protective Edge, she visited Israel as Home Secretary. She spoke of her impressions from that visit at an Independence Day event organized by Bnei Akiva UK youth group, where she was the guest of honor.

At the party, she took the stage and made an impassioned speech, praising Israel. "It is an honor to be with you this evening to celebrate Yom Ha'atzmaut," she began, using the Hebrew words for 'Independence Day.'

"Israel's Independence Day, which is of course preceded by Yom HaZikaron (Memorial Day), when we remember the sacrifice of those who fought to achieve and protect that independence," she said. "Israel is at once an ancient and a young nation. The modern State of Israel is the fulfillment of many generations of struggle." May spoke about Operation Protective Edge and mentioned the "brave soldiers who paid the ultimate price to defend their fellow citizens from indiscriminate terrorist attacks and existential threats." Recounting her visit to Israel, May talked about her meetings with cyber security experts and seeing for herself the progress Israel has made in combating human trafficking. "In those respects, my visit was really very useful," she continued, "but it was also overshadowed by the terrible news which emerged during my stay about the murder of three Israeli teenagers near Halhul."

May also spoke about an issue that she was tasked with as the Interior Minister—the allocation of GBP 11 million for the defense of British Jewish institutions, while attempting to defeat anti-Semitism in the UK.

She said to those present that “The safety of the Jewish people can never be taken for granted… I know that many Jewish people in this country are feeling vulnerable and fearful, that you’re anxious for you families, your children, and yourselves. I never thought I would see the day that members of the Jewish community in the United Kingdom would say that they are fearful of remaining here in our country. That means that we must all redouble our efforts to wipe out anti-Semitism here in Britain.”

“Jewish people have long been an integral part of this country, and we cherish the enormous contribution you make, not just in the past, but today and every day… without its Jews, Britain would not be Britain.”

Foreign Ministry officials have said that May’s support of Israel only grew after she served as the Home Secretary. During her tenure, she began to understand how complicated it is to deal with the sophisticated and growing threat terrorism poses to the world, and the importance of cooperating and coordinating with intelligence agencies.

May focused on intelligence cooperation with Israel during her tenure, and turned the connection between MI6 and Israeli intelligence agencies into a strategic asset.