Russian flotilla off the UK coast 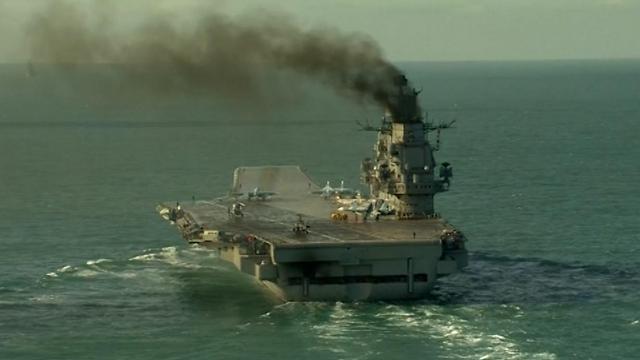 Watch: A large flotilla of Russian war ships, including an aircraft carrier and the largest battlecruiser in the Russian fleet, sailed off the coast of the UK on its way to Syria on Saturday, in effect telling the West that Russia can do what the West does in terms of power projection, but do it better.

Russian President Vladimir Putin is continuing to take advantage of the security vacuum in Syria as his warships passed by British shores on the anniversary of the Battle of Trafalgar on their way to Syria on Friday.

The Russian flotilla includes Admiral Kuzentsov, an aircraft carrier which is able to hold over a dozen Sukhoi 33 fighter jets and an assortment of Helicopters. The flotilla was discovered by Norwegian intelligence on Wednesday as it rounded Norway.

Russian flotilla off the coast of the UK    (צילום: רויטרס)
X

Russian flotilla off the coast of the UK   (צילום: רויטרס)

Putin could have just flown additional bombers directly to Hmeimim Air Base in Latakia, Syria. However, he decided instead to send an aircraft carrier instead. The BBC reports that this is because Putin is trying to send a clear message to the West; I can do what you can do, but better. Russia has already strengthened its naval presence with 10 ships off the coast of Syria - including missile ships – under the framework of fighting Syrian rebels, some of whom are supported by the West.

The Russian ships passed by the white cliffs of Dover while remaining in international waters 18 kilometers from shore. British Naval vessels escorted the flotilla until the Russians left the area. British Defense Minister Michael Fallon said that the British Navy followed the Russian flotilla as a part of the British government’s “steadfast commitment to safeguard the security of the United Kingdom.”

Sukhoi fighter jets on the deck of the Admiral Kuzentsov (Photo: Reuters)
Meanwhile, British Prime Minister Theresa May blamed the Russians for supporting the “sickening atrocities” being carried out by the Assad regime against the people of Syria. She said that the attacks being carried out in Aleppo are “atrocious” and called on European leaders to send a strong message to Russia while at a European Union summit in Brussels Thursday. The HMS Duncan destroyer and the HMS Richmond frigate escorted the Russian aircraft carrier, and were deployed out of the Port of Portsmouth.

British warship HMS Duncan (Photo: EPA)
Regarding the flotilla, Pravda magazine reported that “this is not a pleasure cruise to the Middle East. The ships will strengthen Russian naval presence on Syrian shores, and will help to provide air cover. It seems that the planes being carried by the carrier will be used to attack terrorists.” The aircraft carrier is being escorted by the nuclear powered battlecruiser Peter the Great was also a part of the flotilla. The battlecruiser is thought to be the largest ship in the Russian navy.