Earth from the moon
Photo: NASA 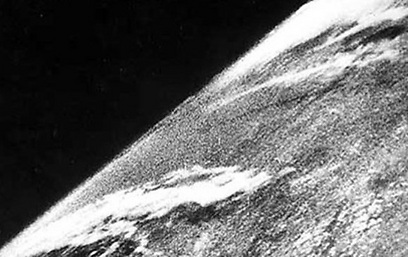 We've come a long road: 70 years since the first photograph from space

October 24, 1956: The US repurposes a Nazi rocket to take the first photograph of our planet from outer space. Seventy years on, with manned orbital missions, moon landings, Mars rovers and an International Space Station, the Blue Marble never looked so good.

On October 24, 1946, a V-2 rocket that the United States took from Nazi Germany after World War II was launched into space from New Mexico. On the rocket was a 35 mm camera that took a photograph every 1 ½ seconds. After a few minutes, the rocket that had threatened Britain during the war crashed in the desert. The camera didn't survive its trip, but its film did. And that's how the first pictures of Earth from space were taken.

Fred Rulli was one of those who retrieved the rocket after it crash landed on Earth. He said that on discovering that the compartment that held the film was undamaged, the scientists" were jumping up and down like kids," he told Air & Space magazine. He continued that on viewing the photographs for the first time, "the scientists just went nuts."

On April 12, 1961, Soviet cosmonaut Yuri Gargarin became the first human in space. Less than a month later, American astronaut Alan Shepard became the second. Shepard said that he saw some of the US from his Freedom 7 space capsule, and he photographed the view.

In the beginning of June 1965, again following another USSR cosmonaut, US astronaut Ed White became the first American to conduct a spacewalk. The commander of the Gemini 4 mission, James McDivitt, took a picture for posterity.

Despite having lost out on being the first human to walk on the moon to Neil Armstrong, American astronaut Buzz Aldrin holds the distinction of having taken the "first selfie in space" in 1966. Visiting Israel a year ago to take part in the 66th International Astronautical Congress in Jerusalem, Aldrin explained that it was via playing with the ultraviolet camera that the crew of Gemini 12 found that they could take a selfie. Aldrin photographed himself on a spacewalk with Earth visible behind him.

Photos from the moon

On August 23, 1966, the first photograph of Earth from the moon was taken, photographed by Lunar Orbiter 1, an unmanned robotic American spacecraft.

Just under three years later, Apollo 11 landed on the moon in July 1969, achieving the first American victory in a space-race battle against the USSR. Thus the world received its first view of itself from its natural satellite.

On an earlier mission at the end of 1968, Apollo 8, took a photograph of the planet with only a small portion hidden in darkness.

The most famous photograph of the planet was to come from Apollo 17 in December 1972 and is titled "The Blue Marble." While NASA credits the entire crew for the photograph, it is believed that Jack Schmitt was actually the photographer.

Whilst Africa takes up most of the photograph, the topmost, cloud-free section shows the Middle East.

Another picture from Apollo 17, NASA's final mission of the Apollo program, was taken of Commander Eugene Cernan holding an American flag on the moon with Earth a small dot in the background. Schmitt also took this photograph.

Another picture that reverses the perspective of the moon and Earth from Apollo 17 shows the planet peaking over the lunar horizon.

In December 2015, NASA released a new photograph of the planet from the moon, photographed by the Lunar Reconnaissance Orbiter. Africa also features largely in that picture.

NASA released a picture in 2014 of the Earth and the moon as taken from the Mars rover Curiosity.

In 1981, nine years after abandoning manned missions to the moon, NASA launched the space shuttle Columbia into space. It orbited the planet 37 times in its first trip. Some photographs from the space shuttle program follow.

Astronauts aboard the International Space Station (ISS) provide some of the incredible photographs nowadays of our planet. The American Scott Kelly has been especially prolific in photographing, including pictures of Israel.

US flag aboard ISS (Photo: Scott Kelly)
Kelly's replacement on the ISS, Jeff Williams, who broke the record for stay in space for an American astronaut, also didn't miss the land of Israel in his snapshots. "Every time we pass over, I have been fascinated with this view considering it contains the vast majority of Biblical history. My father—a high school history teacher—gave me a love and appreciation for history, and I have a special appreciation for that history,” Williams wrote on his Facebook account.

The land of the Bible from space (Photo: Jeff Williams)

To end, below are some photographs taken from the ISS over the past month.

Israel and the region at night (Photo: NASA)