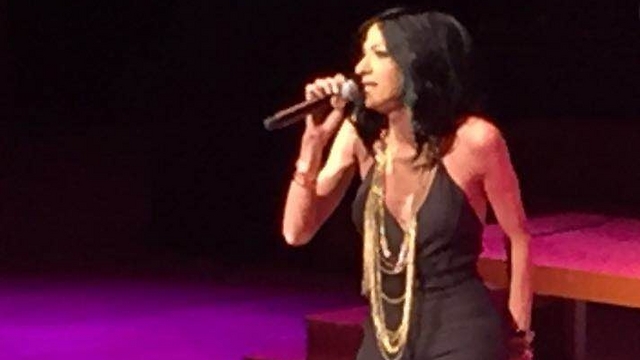 Watch: The singer comes out against the UN body's decision that did not acknowledge the Jewish people's connection to Jerusalem; while her decision brought on public applause, she shares that she was criticized by one of the organizers for supposedly politicizing the show.

Israeli singer and iconic pop sensation Dana International recently took on the role of goodwill ambassador of her own accord, expressing pro-Jewish sentiment during a show in Luxemburg. Choosing to sing the classic Jewish song “Hava Nagila,” the songstress told her audience that she wished to dedicate it to “the stupid UNESCO and its decision,” referring to the United Nations agency’s failure to recognize the Jewish people’s connection to Jerusalem. “Enjoy with the Jewish people from now and to eternity,” she said, before beginning the song. The crowd reacted with a round of applause.

After the show, Dana explained her statement and decision to include the song. “I honestly didn’t plan it,” she said. “It happened five songs into the show, after I already saw that the audience was really warm and friendly. Maybe that’s what gave me the confidence to get a little carried away.”

“It’s funny,” she added. “I don’t feel the need to say this kind of stuff back home, quite the opposite: I’m more comfortable voicing my criticism and talking about what I think should be different. But when I’m abroad I get this instinct to protect my country, I feel that it’s my right and privilege (to do this) for a place that has made all my dreams come true.”

She told reporters that after she stepped off the stage, she received some criticism over what she said on stage. “At the end of the show, one of the organizers came up to me and protested over what I said, saying that it wasn’t a political event. I’m sure that if I would have said something of an opposite nature, I wouldn’t have heard that.”