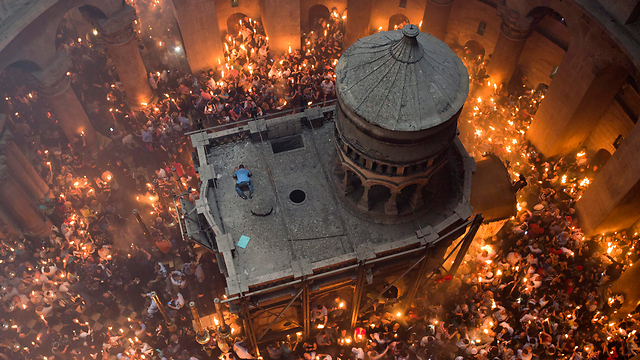 IN PICTURES: IDF and Jerusalem in EPA's photos of the year

The European Pressphoto Agency selected its favorite photos from 2016: The burning skyscraper in Dubai, a month-old hippopotamus in Prague, and Israel's Midburn festival all feature in the album.

The Holy Fire Ceremony in the Church of the Holy Sepulcher (Photo: EPA)

A month-old hippopotamus in the Prague zoo (Photo: EPA)

IDF soldiers of the mixed-gender Bardelas Battalion relaxing between exercises outside of Regavim (Photo: EPA)

A long-time exposure of about 10 seconds shows the Aurora borealis in the night sky near Lietzen, Brandenburg, Germany. (Photo: EPA)

Azat Shajbyrov reacts with a baby falcon on his head in Kyrgyzstan. (Photo: EPA)

Kobe Bryant, one of the NBA's biggest stars in history, bids adieu at the end of his final game. (Photo: EPA)

Iceland's national soccer team celebrates with their fans after their victory over Austria in the Euro. (Photo: EPA)

A Syrian man sits next to his daughter, who is suffering disabilities due to injuries sustained in Syrian government shelling, at their home in Daraa. (Photo: EPA)

Children from a monastery in South Korea at an amusement park in Seoul (Photo: EPA)

German defender Jerome Boateng clears the ball from the line during the UEFA Euro 2016 group C preliminary round match between Germany and Ukraine at Stade Pierre Mauroy in Lille Metropole, France. (Photo: EPA)

David Cameron announces his resignation as UK prime minister following the results of the Brexit referendum while his wife looks on. (Photo: EPA)

A woman, who lost her nine-year-old grandson during the tornado, is comforted by another woman in Funing County, China. (Photo: EPA)

Irish supporters of their national team celebrate a victory at the Euro. (Photo: EPA)

Drilling a terrorist situation before the Euro in France (Photo: EPA)

Policeman recovers a crucifix taken from the National Gratitude Church during a student protest in Chile. (Photo: EPA)