Hamas prime minister Ismail Haniyeh. Why has he not met the 'Creator of the universe' yet?
Photo: AFP 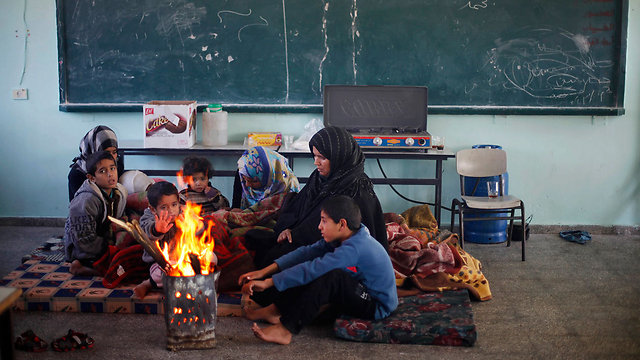 Why is the Hamas government as stable as Netanyahu government?

Op-ed: The rhetoric between Jerusalem and Gaza may be filled with deep hatred, but it allows both governments to prove there is no solution; In the meantime, the strip's residents are paying the price.

We recently learned that the government is making it difficult for Palestinian Authority workers from Gaza to reach the PA offices in Ramallah. Why is Israel making things difficult for Fatah-affiliated PA workers who coordinate between Gaza’s residents and Israel? And does it have anything to do with the expected report about Operation Protective Edge?

Defense Minister Avigdor Lieberman has suggested quite a few times to destroy the PA, led by Mahmoud Abbas. Some deny there is such a policy and that what is happening is a security check. In any event, there is some logic in the system.

It may be time to stop harassing the residents of Gaza; our decade-long experience shows it is not helping (Archive Photo: Reuters)
First there was coriander. After Hamas took power in Gaza, Israel decided to restrict trade in the strip. Exports from Gaza were completely banned, while heavy restrictions were imposed on imports. For security reasons, of course. Coriander, which was on the list of banned products, is a known security risk. As part of these restrictions, exporting carbon dioxide to the Pepsi factory in Gaza was also banned. Because from soda one can make… something. The initial explanation for this policy was the desire to encourage “the people” to rebel against Hamas, which is clinging to power via outright military dictatorship. If the economic situation is bad, so goes the theory, “the people” will rebel. As there is no shortage of weapons in Gaza, an uprising may even topple Hamas. Almost a decade later, it seems “the people” understood the precise opposite of the intended message. The Israeli blockade of Gaza (and, to a lesser extent, the Egyptian one) is the weapon being used by Hamas to explain why the economic situation in Gaza is so dire—an unemployment rate of more than 30 percent and an average standard of living lower than that among Israel’s poorest population. Israel is being blamed for this, while its current explanation is that Hamas is the one responsible. But how is Hamas responsible? When an organization launches a rocket at Sderot, the defense minister announces that “Israel sees Hamas as responsible,” and in response, Israel bombs “Hamas terror facilities in Gaza.” There is something extremely backward about this cycle, which has been repeating itself for years: The more “terror facilities” we bomb, the more “terror facilities” remain for a future bombing. We have bombed so many terror facilities in Gaza that there is only one thing that has not been hit. Lieberman promised that as soon as he is appointed defense minister, he will take care of the elimination of Hamas Prime Minister Ismail Haniyeh. Yet this does not appear to be on the agenda. Other leaders are still with us, as well, to continue this never-ending quarrel. And even the allegedly ephemeral organizations are not really harmed. This only serves to show us that the price of the war on terror is being paid by Gaza’s residents, who are only involved in it by because of the power of the dictatorship controlling them. Hamas, the Islamic Jihad and the rest of the ephemerals are alive and well.

How is this happening? How is the Hamas government as stable as the Netanyahu government? And how is it that Haniyeh had yet to meet “the Creator of the universe,” despite the defense minister’s promise? Because the situation is convenient for both governments: The one in Jerusalem and the one in Gaza.

A peaceful solution may be impossible, but the question is who is paying for its absence. Is the Hamas government paying? Of course not. Leaks from the report on Operation Protective Edge reveal that its authors found that Hamas’ military power has not been worn out at all. It may therefore be time to stop harassing Gaza’s residents. Our decade-long experience shows it isn’t helping.