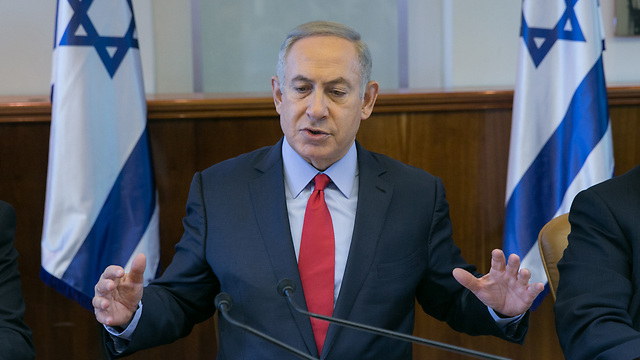 Despite objections by Kulanu, Bayit Yehudi ministers and two from his own Likud party, Prime Minister Netanyahu is expected to obtain the majority he needs to bring the proposal to close down the IPBC to a vote in the Knesset.

A bill proposal aimed at canceling the launch of the new Israel Public Broadcasting Corporation (IPBC)—which is set to replace the Israel Broadcasting Authority (IBA)—is expected to receive the support of the coalition next week, Ynet has learned.

A survey conducted by Ynet among members of the government on Sunday evening found that Likud ministers Miri Regev, Yariv Levin, Ofir Akunis and Tzachi Hanegbi intend to vote in favor the initiative spearheaded by Prime Minister Benjamin Netanyahu.

Ministers Yuval Steinitz, Yisrael Katz and Ze'ev Elkin have yet to announce their position, but they are expected to eventually lend their support to the bill as well. Minister Haim Katz has also yet to reveal his position on the matter.

Only two Likud ministers are expected to oppose the bill: Public Security Minister Gilad Erdan, who in the previous term initiated the public broadcasting reform that formed the IPBC, and Social Equality Minister Gila Gamliel.

While most Likud ministers support the prime minister's initiative to close down the IPBC and instead keep the IBA on air in its current format, the three Bayit Yehudi ministers all oppose the bill. Ministers Naftali Bennett and Ayelet Shaked have, in the past, expressed their support of the new IPBC, and Minister Uri Ariel shares their position.

Shas ministers Aryeh Deri and David Azoulay have stated their opposition to closing the new IPBC and have made this position clear to the prime minister, while Kulanu ministers Moshe Kahlon and Yoav Galant also want to keep the IPBC open.

Other partners in the coalition have yet to announce their position on the matter, but Yisrael Beytenu ministers Avigdor Lieberman and Sofa Landver, as well as Minister Yaakov Litzman from United Torah Judaism, are all expected to support the prime minister's initiative to cancel the public broadcasting reform.

Assuming the government does approve the bill, the next step would be to bring it to a vote at the Knesset. If the ministers currently against closing the IPBC choose to vote against the prime minister at the Knesset as well, it could have far-reaching ramifications.

Finance Minister Kahlon, for example, decided to boycott both the cabinet meeting and the coalition leaders meeting on Sunday in protest of Netanyahu's plans to bring the initiative to a vote in the government. In response, the prime minister decided to postpone the vote to next week.

On Monday, Kahlon said he sees "no need to change the existing agreements," noting that while coalition agreements do allow for the prime minister to deal with issues relating to the media, "there is also (a clause noting) that (the spending of) every sum over NIS 10 million is under my responsibility."

"Closing down the IPBC means an immediate loss of NIS 1.7 billion, Kahlon went on to say, adding that "Behind all of the numbers and deliberations are people who were hired and are still being hired who could lose their jobs."

"There needs to be a balanced (broadcasting) authority. There's a lot of money here, and (closing the IPBC) means wasting hundreds of millions of shekels and unless we're convinced there's no waste—we won't let it happen," the finance minister declared.

The IPBC has already started preparing to go live and has committed to launching between January-July 2017. But sources within the new broadcasting company say the prime minister's attempts to close it down are preventing the IPBC from bringing in new employees.

'Leftists' took over the IPBC

As part of his efforts to close down the IPBC, Netanyahu and his associates claim that "leftists" managed to infiltrate the new corporation, including chairman Gil Omer, despite the fact that it was the prime minister who signed off in April on the appointments of the corporation's council, which includes Omer.

The prime minister's letter approving the appointment of the IPBC's council

The prime minister concluded his letter to the council with, "I wish you success in fulfilling your important role."

Netanyahu, who is also the communications minister, recently met with the IBA's special manager Bari Bar-Zion to see if the existing IBA could continue broadcasting.

Meanwhile, representatives of the IBA workers unions wrote a letter to Finance Minister Kahlon, telling him they were "fully prepared to take significant re-organization steps, including complete managerial flexibility and marching the IBA to the top as a modern, technological, journalistic body."

Copies of the letter were also sent to Netanyahu, Chairman of the Knesset's House Committee MK Yoav Kisch, and coalition chairman MK David Bitan, who first initiated the legislation the prime minister is now pushing.

The letter was signed by the leaders of six different workers' unions in the IBA. In it, they commit to rehabilitating the IBA while still "meeting the budget defined for the IPBC, meaning NIS 700 million."

Raz Shechnik contributed to this story.