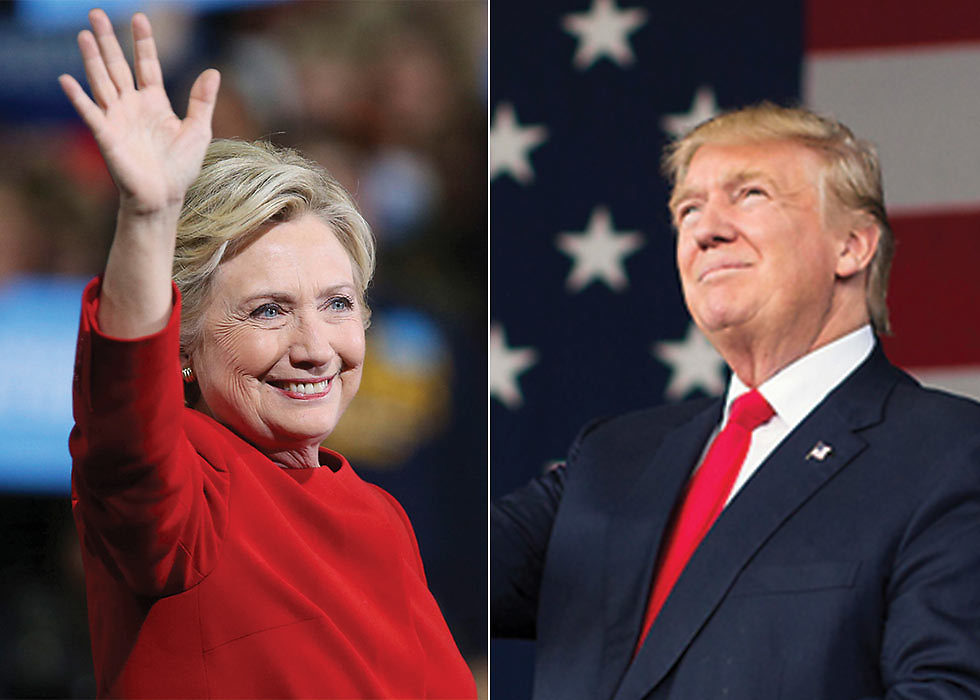 As Hillary Clinton positions herself once more as a national healer, Donald Trump focuses on winning despite a 'rigged' system; speaking before a crowd of his supporters on Monday, Trump says that 'Obama was a disaster for Israel' and that Clinton is as guilty as Obama for creating ISIS.

With the cloud of an FBI investigation lifted, Hillary Clinton and Donald Trump struck strikingly different tones as they moved into the final hours of a volatile, nearly two-year-long presidential campaign. Clinton made a concerted effort to brind people together, as Trump, doubling down on his divisive rhetoric, fueled the fear of international terrorism by saying, "Obama was a disaster to Israel" and blaming both Obama and Clinton for the surge of ISIS.

After days of full-throated attacks on Trump's qualifications and temperament, Clinton cast herself as the candidate of "healing and reconciliation." She started her Sunday with a visit to an African-American church in Philadelphia, as she tried to motivate black voters in the crucial swing state to support her. And she ended with an evening rally in Manchester, New Hampshire, featuring remarks from Khizr Khan, the Muslim-American lawyer whose Army captain son was killed in Iraq, and from folk singer James Taylor.

Photo: AP
"This election is a moment of reckoning," she told voters on Sunday night. "It is a choice between division and unity, between strong, steady leadership and a loose cannon who could put everything at risk." Clinton said she was "hopeful and optimistic" about the future.
Basketball legend LeBron James introduces Hillary Clinton at a rally in Cleveland
X

Donald Trump at a rally (Photo: Reuters)
"This is a whole different ballgame," Trump said at a rally in an airport hangar in Minneapolis, predicting victory in Minnesota, a state that hasn't cast its electoral votes for a Republican since 1972. At a rally in Virginia that Trump called his "midnight special speech," the GOP standard-bearer called the race a "marathon."

Photo: Reuters
"We are going to have one of the great victories of all time," he said, comparing the US election to the "Brexit" vote by The UK to leave the European Union "times 50."

Photo: AFP
Overshadowing the flurry of last-minute campaigning was FBI Director James Comey's latest letter to Congress, informing lawmakers that the bureau had found no evidence in its hurried review of newly discovered emails to warrant criminal charges against Clinton. Still, Trump continued to seize on the email issue, despite the FBI's finding. "Hillary Clinton is guilty. She knows it, the FBI knows it, the people know," he said at a rally that drew thousands to an amphitheater in the Detroit suburbs. "And now it's up to the American people to deliver justice at the ballot box on Nov. 8." Comey's move capped a stunning chapter in the bitter, deeply divisive contest. The director's initial decision to make a renewed inquiry into Clinton's emails public on Oct. 28 upended the campaign at a crucial moment, sapping a surging Clinton's momentum and giving Trump fresh ammunition to challenge her trustworthiness. Clinton's campaign, furious at Comey's handling of the review, welcomed Sunday's announcement. Communications director Jennifer Palmieri told reporters, "We're glad this matter is resolved," though Clinton herself did not mention the issue at her campaign events. The new review involved material found on a computer belonging to Anthony Weiner, the disgraced former congressman and estranged husband of Clinton aide Huma Abedin. While Comey was vague in his initial description of the inquiry, he said Sunday that the FBI reviewed communications "to or from Hillary Clinton while she was secretary of state." Based on that review, Comey told lawmakers the FBI was not changing the conclusion it reached this summer. Then, Comey said, "no reasonable prosecutor" would recommend Clinton face criminal charges for using a private email system while at the State Department. The FBI began investigating the handling of classified material on Clinton's private email server shortly after she announced her bid in April 2015. The issue has dogged Clinton's campaign and contributed to the questions a majority of Americans have about her honesty and trustworthiness. Clinton still appears to hold an edge over Trump in the campaign's final stretch. The Republican has a narrow path to victory that requires him to win nearly all of the roughly dozen battleground states up for grabs. The candidates spent Sunday sprinting across swing states as they sought to lock up support ahead of Election Day. As the campaign's final weekend drew to a close, more than 41 million Americans had already cast their ballots in early voting. Clinton's high-wattage allies also fanned out across the country, including US President Barack Obama, who was joined by musical icon Stevie Wonder at a rally in Florida. He'll join Clinton and her husband, former president Bill Clinton and First Lady Michelle Obama along with rock stars Bruce Springsteen and Jon Bon Jovi at an evening rally in Philadelphia on Monday. She'll also campaign in Grand Rapids, Michigan; Pittsburgh and Raleigh, North Carolina. Trump's campaign manager, Kellyanne Conway, told reporters Sunday that Trump planned to keep up the breakneck campaign pace through Election Day. On Monday, he will go to Florida, North Carolina, Pennsylvania and New Hampshire. She added that after voting in New York Tuesday morning, Trump was expected to return to Pennsylvania, Michigan, Ohio, North Carolina and New Hampshire later in the day.