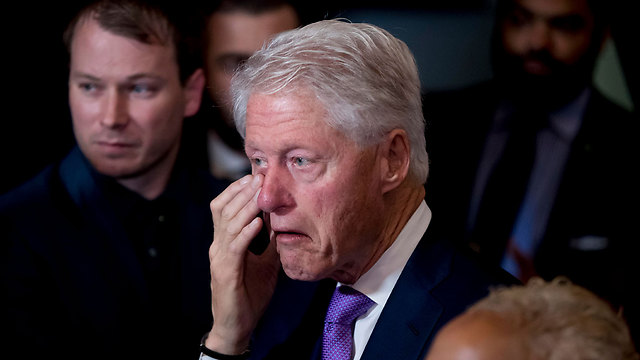 The former president tries to conceal his emotions, but cameras catch him in his moment of pain.

Former US president Bill Clinton will not be returning to the White House, this time as the man behind the woman. As he stood by his wife, former secretary of State Hillary Clinton, while she delivered her concession to the American people, Bill Clinton was spotted wiping away an errant tear.

Hillary Clinton was also moved, her voice at times wavering, as she delivered her statement to her heartbroken supporters on Wednesday. She did not address them the previous night, as the election's results were made clear. And when she did finally speak, it was two hours later than scheduled. Such can happen even with the best made plans.
Hillary Clinton concedes the election    (רויטרס)
X

Hillary said she was "sorry" she didn't win the election, adding, "This is painful, and it will be for a long time."

A feminist since her early days at Wellesley, Clinton addressed the women, many of whose vote eluded her. "Women should know nothing has me me prouder than to be your champion," she said.

"To the little girls who are watching." She added, "you are valuable and powerful and deserving" of every opportunity in the world."