Wedding ceremony on a plane 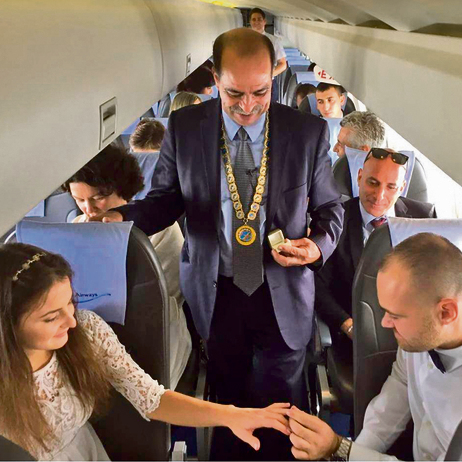 Operation Wedding in the Sky

Dozens of Israeli couples opposed to the Rabbinate’s authority over wedding proceedings in the country fly to Cyprus, so as their weddings take place they are literally flying high.

Passengers arriving at Ben Gurion Airport on Saturday night will have been surprised at the spectacle of dozens of brides and grooms clad in suits and wedding dresses.

Some of the couples who refuse to be wedded in Israel given their opposition to the rabbinical institution which presides over all weddings—on the proviso that they are in accordance with Jewish law—were part of the ‘operation’ dubbed ‘Wedding in the Sky’ which saw the couples fly to Cyprus to seal the deal. However, the official wedding ceremony took place during the flight itself.

“The whole idea of a wedding in Cyprus is that the institution in Israel will recognize us. So if a special wedding on a plane can be combined then great,” explained the 46-year-old groom llan Shanir.

“It was a complex logistical operation but a whole lot of fun,” said the operation’s organizer, Natan Ortzki. “We bought a plane from Cyprus with Cypriot representatives who can marry the couples and in Cyprus we celebrated with the families.”