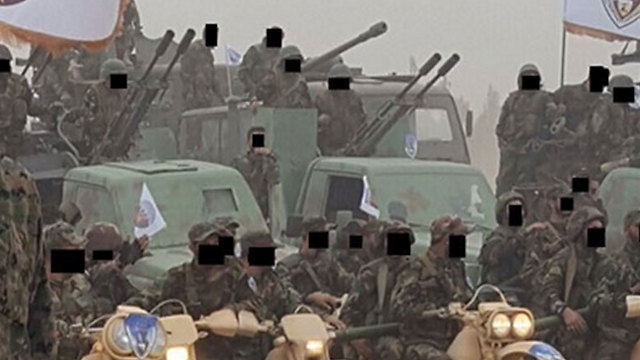 The show of force was intended to highlight Hezbollah's growing military capabilities in addition to their expanding role in the region; 'We are armed, well trained and more capable. This is all to protect Lebanon and Lebanon's interests. Everyone needs to read this message exactly as it is.'

A military parade staged by Hezbollah in the Syrian city of Al-Qusayr has caused a stir in the Arab world. According to Hezbollah Deputy Secretary General, Naim Qassem, "This military parade is a clear and visible message to everyone and there is no need for clarification or interpretation of the meaning of that message."

Qassem's comments are the first reference made by a senior Hezbollah official on the parade, which depicted photos showing hundreds of men carrying military equipment, including Russian-made hardware.

Additionally, diplomatic officials told Asharq al-Awsat that the matter of how Hezbollah came to possess American-made M-118 armored vehicles is under investigation. Some believe that the equipment was taken from the Lebanese Army.

Qassem went on to say, "Cooperation between us and the Syria regime is at an all-time high. This military parade is a part of field operations. We have a trained army. The Resistance is not based on gang warfare. We are armed, well trained and more capable. This is all to protect Lebanon and Lebanon's interests. Everyone needs to read this message exactly as it is."

The Hezbollah Deputy Secretary further added that, "We are in Syria and there is no need for interpretation or justification. We stand beside the Syrian army and the Syrian state. If we weren't involved in Syria, terrorists would enter into every sector of Lebanon. Our intervention in Syria is no longer a subject of discussion among the Lebanese."

Hezbollah's show of force comes at a time when there is political order in Lebanon, following the election of Michel Aoun, an ally of the Shiite organization, as President. Aoun is now working with Prime Minister-designate Saad Hariri on forming a government with the participation of Hezbollah.

Lebanese Prime Minister Saad Hariri of the March 14 Alliance, which opposes Hezbollah, officially condemned the rally, saying the parade shows that Hezbollah prefers Iranian interests over those of Lebanese interests. "This shows that the organization does not care about the new era after the election of Michel Aoun as President. This era is supposed to restore the role, presence and dignity of the Lebanese state."