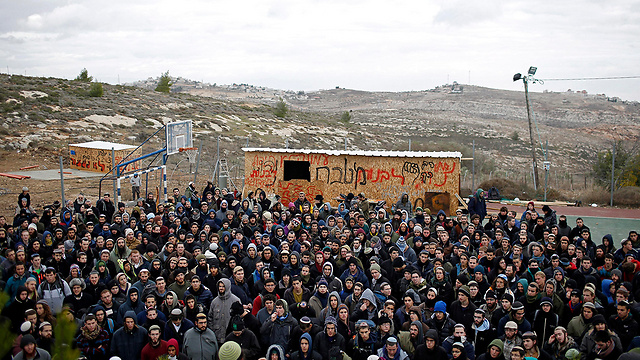 Volunteers and residents of Amona are preparing for a major showdown with the IDF and Israel Police due to the imminent evacuation of the Jewish settlement outside of Ofra; leaders are calling for peaceful, passive protests.

The Amona settlers are preparing for a confrontation with the IDF adn are refusing to cooperate with an order to evacuate the settlement. Dozens of people have come to Amona to try and prevent its demolition by the Israeli authorities.

Sheet metal walls have also been erected, along with plans to form human chains around the structures set to be demolished.

The IDF and the Israel Police are also preparing for a standoff, with the IDF even increasing troop presence in preparation for the demolishing. As was the case with the Gaza disengagement, the actual eviction order will be carried out by the Israel Police and Israel Border Police, while IDF forces secure the surrounding area.

Due to so many people coming out in support of Amona, the settlement heads have been conducting special talks instructing the demonstrators to keep all protests peaceful.

Tzahi Sukkot was giving one of the talks, and gave several main points to the protestors, saying that they are in a war of attrition which requires devotion, and that they will not be like sheep led to slaughter. He said that the protestors must only use passive means, as this is what the residents of Amona want. He added that if any of the supporters has a problem with this method, they must go speak to the rabbi of the settlement.

“(The residents of Amona) are heroes,” Sukkot said. “They gave up on the reimbursements they could have gotten, They’ve given up on all of the slaps they’ve received from the politicians, because (the politicians) believe that this is the best thing for Israel.”

He continued, saying “it’s important that the lazy public stops being like a sheep led to slaughter, stops settling for less. The public isn’t ready to evict (Amona) for free. For this, it’s important that there will be a struggle, it’s important that this will be a fierce protest.” Meanwhile, speaking at a conference in Eilat, Defense Minister Avigdor Lieberman addressed the issue, saying “we truly want what is best for the people, and we gave them the best framework (for the eviction) that we could under the circumstances. The Israeli leadership worked extensively on this, and I’m very sorry that (the settlers) didn’t accept the proposal.”