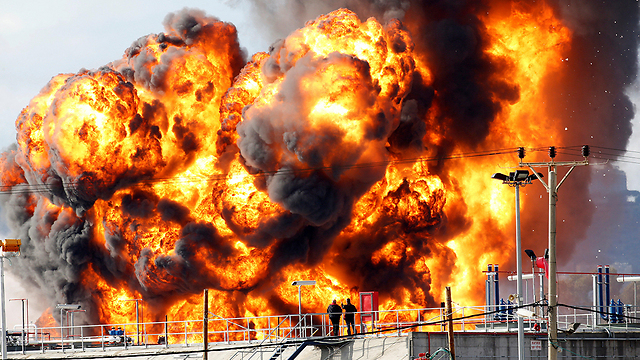 Giant fire continues to rage at a Haifa gas refinery

Forty fire fighting crews work to contain and extinguish giant conflagration engulfing a gasoline refinery in Haifa Bay; no injuries reported; fire services say flames not under control as they battle to prevent it from spreading to nearby gas tanks, but manage to reach roof of container; after initial hopes, fires show little sign of waning by Sunday afternoon.

Forty firefighting crews were called from all over the country to Haifa Bay on Sunday morning after a gasoline refinery burst into flames, threatening to spread throughout the vicinity and sending plumes of smoke into the northern skies.

According to Magen David Adom paramedics, there were no injuries reported immediately after the incident. However, resident of Kiryat Haim and Kiryat Motzkin are being urged to remain inside and close their windows.

Fire services reported that their priority was to contain the giant conflagration in order to prevent its spreading to other gas tanks.

“The incident involves one thousand cubic meters of gasoline. The fire is not under control,” the fire services said on Sunday morning.

Shortly after 11:30am, firefighters managed to reach the roof of the burning refinery and pour foam on it from multiple directions. They described the progress as “a significant relaxation.”

However, full control over the fire had still not yet been attained as the flames continued to rage. By 4:30pm, the flames had showed few signs of waning however and in fact were reinvigorated, throwing the fire services into a state of confusion as to why. "It isn't clear. According to the representatives of the refinery the amount (of gas) was supposed to have been finished a long time ago," said a firefighter. It later emerged that the amount of gas had been miscalculated.

Investigations are currently underway as to whether the fire was caused by static electricity. When the fire broke out, the container was in the process of being emptied into another one.

Before the fire services managed to reach the roof, a spokesman from the national firefighters' commission, Yoram Levi described the severity of the situation in an interview with Ynet.

“The incident is centered on one tank that is burning and that will burn until the fire is put out. The aim is to prevent damage to other tanks,” he said. “Fire fighting aircraft are not relevant for this incident. We are using foam and water cannons. In addition, we are cooling down the gas tanks situated nearby. This is a very serious incident it can potentially cause extremely serious danger.”

The disaster comes just one month after Haifa was hardest-hit by the wave of fires which swept across Israel. A total of eleven neighborhoods went up in flames in Haifa as the fires ravaged the city and 527 homes were completely destroyed.