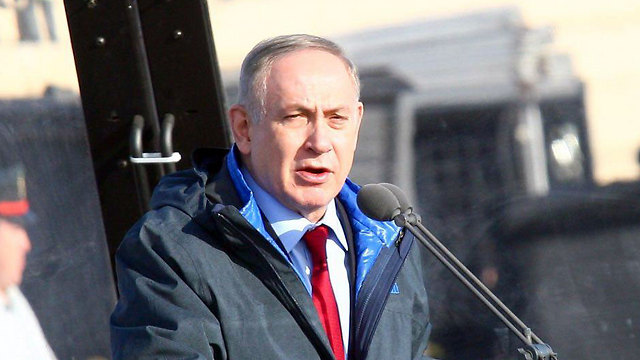 Due to a reported breakthrough in the police investigation, Attorney General Avichai Mandelblit is expected to issue a criminal probe against Prime Minister Netanyahu; the official inquiry is due to focus on two accounts of bribery and fraud.

The Channel 2 segment was the latest in a series of reports in Israeli media saying that police are close to opening a criminal investigation against the prime minister.Attorney General Avichai Mandelblit is expected to order the head of police investigations to open the probe into allegations of bribe-taking and aggravated fraud leveled against Netanyahu.

Netanyahu (Photo: Motti Kimchi)
The station said Netanyahu had accepted large-scale "favors" from businessmen in Israel and abroad. It said there had been a breakthrough in the case three weeks ago, but gave no further details. Channel 2 said Netanyahu was the central suspect in a second investigation that also involves members of his family. It said some 50 witnesses were involved in the case. The station, along with the Ynet news site, said a formal criminal probe is expected to be opened next week. Israel's Justice Ministry and police declined to comment on the reports, saying they would issue an update "in due time." Police said Thursday that the media reports contained "speculations and disinformation." Netanyahu's office did not respond to a request for comment. But in the past, it has denied all allegations of wrongdoing by the prime minister. In July, Mandelblit announced he was looking into matters concerning Netanyahu but did not disclose what they were. Israeli media at the time reported they were related to Netanyahu's personal finances.

Leading Israeli opposition lawmaker Erel Margalit of the Zionist Union party has been campaigning for a formal investigation into suspicions of prominent donors improperly transferring money for Netanyahu's personal use, as well as reports that Netanyahu's personal attorney represented a German firm involved in a $1.5 billion sale of submarines to Israel.

Mimran, who is serving eight years in prison for carbon-tax fraud, claimed during his trial to have donated the money to Netanyahu during the 2009 Israeli election campaign.

Netanyahu, who has steadfastly denied the allegation, did admit to accepting $40,000 from Mimran.

In May, State Comptroller Yosef Shapira submitted a critical report on Netanyahu’s foreign trips from 2003 to 2005 as finance minister—some of which were taken with his wife and children.

In an apparently unrelated case this month, there were calls for Netanyahu to be investigated for his role in a Defense Ministry deal to buy submarines from a German company partly owned by the Iranian government.

Allegations surfaced last month that Netanyahu may have been swayed in the decision by business ties his personal counsel, David Shimron, had with the sub’s builder, ThyssenKrupp.

Netanyahu and Shimron have denied any wrongdoing in the matter.