Despite BDS calls to boycott goods produced in the West Bank, a recent report has revealed that West Bank goods are more in demand than ever before.

At the Shahak industrial park being built in the northern West Bank, over 100 dunams have been sold to developers. The Barkan industrial park outside of Ariel - which already has 160 factories and companies – has registered a further 60 companies who want to relocate to the area.

Due to this huge increase in demand, another industrial park is set to open. Called the Nahal Rabah – Gates of Shomron Industrial Park, it will be located next to Sha’ar Tikvah and Oranit, putting it within a 20 minute drive of Petah Tikvah. 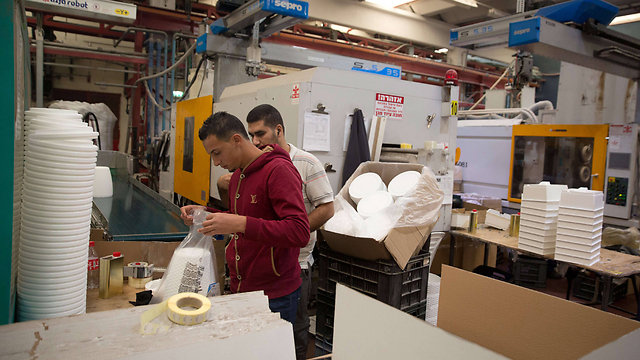 Palestinian workers at a factory in the Barkan Industrian Park (Photo: AFP)
The industrial park will include both manufacturing and hi-tech companies, and will be owned by the Shomron Regional Council in conjunction with the Oranit and Elkana local councils.

Head of the Shomron Regional Council Yossi Dagan was one of the drivers behind the opening of the new industrial park. He said “on the one hand, international companies don’t really comply with EU decisions. On the other hand, Israeli companies aren’t ready to give up on the advantages (of operating in these areas), and are marketing their products to places other than Europe, such as Africa, India, and China.”