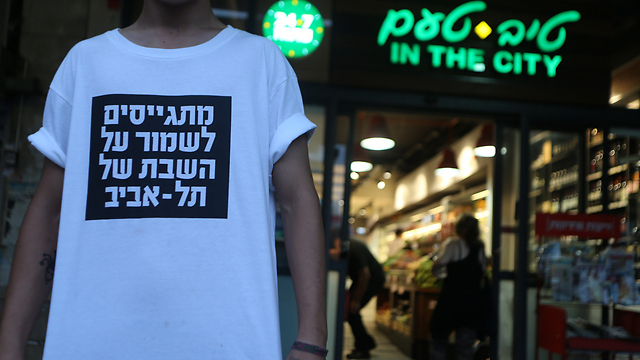 City that never sleeps to rest on Shabbat?

The Israeli cabinet is set Sunday to announce its position on a controversial 'Shabbat Law' which would see Tel Aviv's minimarkets close down on Shabbat; 'Anyone who thinks you can turn Tel Aviv into Bnei Brak is mistaken.'

The government is expected to state its stance on the "Shabbat Law" in Tel Aviv, which is set to regulate businesses in the city which operate on Shabbat and the holidays.

The position will be given in light of a petition to the High Court of Justice was submitted by the city of Tel Aviv.

The heads of the ultra-Orthodox parties sent a letter to Prime Minister Benjamin Netanyahu detailing their grave displeasure that businesses are allowed to operate on Shabbat according to municipal bylaws.

Outside Tiv Tam minimarket; shirt reads 'recruiting to keep Shabbat in Tel Aviv' (Photo: Yariv Brenner)
However, opposition in the Knesset, particularly amongst the ultra-Orthodox factions, may lead to a cancellation of these municipal bylaws, and bring about the closure of minimarkets in Tel Aviv on Shabbat.

'We won't be turned into Bnei Brak'

Miki Gitzin, a member of the Tel Aviv Municipality and chairwoman of "Free Israel," said that the government is trying to create an impossible reality due to the fact that it is impossible to close the city of Tel Aviv on Saturdays.

Outside of am:pm market: We don't want to see am:pm closed (Photo: Yaron Brenner)
"On the table is a proposal which was decided upon in a democratic fashion by the Tel Aviv municipality. Anyone who thinks they can turn (secular) Tel Aviv into (ultra-Orthodox) Bnei Brak or Beit Shemesh is mistaken, and will lead Israel into an unnecessary conflict," she warned. "The city will remain free, and we will keep it that way." Minimarkets remained open on Shabbat in Tel Aviv for decades, until the High Court of Justice instructed the municipality to pass a law which would regulate the opening of these minimarkets in 2013. However, interior ministers have since refused to sign off on the new municipal law, and Interior Minister Aryeh Deri (Shas) has demanded a new decision be enacted. The Tel Aviv municipality has refused to comment until the government has made its position clear.