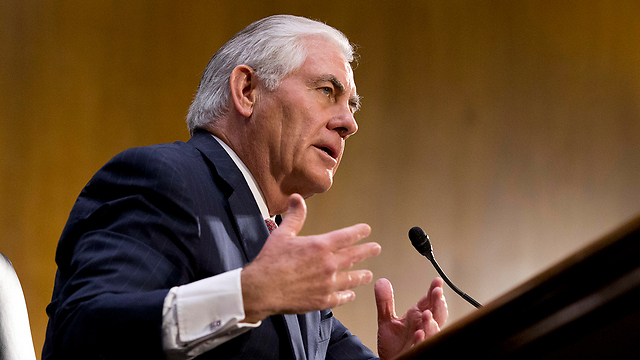 Tillerson; 'We have to recommit to Israel'

During his senate confirmation hearing to become the next US secretary of State, Rex Tillerson pledges to rebuild the US-Israel relationship, slams UN anti-settlements resolution, BDS.

Rex Tillerson, US President Elect Donald Trump’s pick for secretary of state, said the United Nations Security Council resolution that condemned settlements as illegal was “not helpful” and “actually undermines setting a good set of conditions for talks to continue” between Israelis and Palestinians on Wednesday.

In a confirmation hearing with the Senate Foreign Relations Committee, the former ExxonMobil CEO pledged to restore the US-Israel relationship after eight years of tumultuous ties between President Barack Obama and Prime Minister Benjamin Netanyahu.

Taking the step of directly criticizing current Secretary of State John Kerry, Tillerson said: “The secretary’s speech, which followed that UN resolution, I found quite troubling because of the attacks on Israel and in many ways undermining the government of Israel itself in terms of its own legitimacy and the talks.”
Tillerson also spoke of his desire to improve bilateral relations between Washington and Jerusalem.

“Israel is, has always been and remains our most important ally in the region,” he said. “I think in the Trump administration, the president-elect already made it clear and, if I’m confirmed, I agree entirely and will support (Israel).”

“We have to recommit … that we’re going to meet our obligations to Israel as our most important strategic parter in the region,” he added.

As a former oil executive, Tillerson spent his career fostering deep ties to Sunni Arab and Gulf states. Since rising to the top at one of Exxon Mobile in January 2006, much of his professional life has involved working with Israel’s petroleum-rich neighbors—but not Israel itself.

Full review of the Iran deal

During the hearings, Tillerson also expressed concerns about the Iran nuclear deal, specifically that he believed it did not prevent the Iranian regime from purchasing a nuclear weapon, only from developing one.

Tillerson called for a “full review” of the agreement once the Trump administration takes the helm, and said the United States should enforce a policy that ensures Iran cannot enrich uranium.

Asked how he would respond to BDS activities, Tillerson replied that he would change the relationship with countries that cooperated with the boycott movement against Israel.

“Those countries (supporting BDS) need to understand that it does shape our view of them,” Tillerson said.