Amona evacuation. Sadness on the right, joy on the left
Photo: Tal Shahar 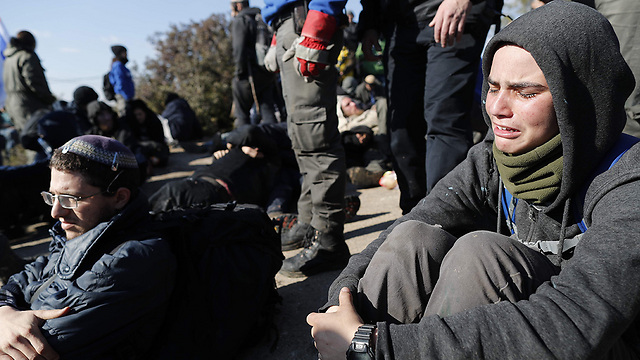 Amona has been evacuated, and the Israelis have divided into the obvious camps: Exultation and joy on one side, sadness and pain on the other. If your wear right-wing glasses, the destruction of the small community is a “difficult and sad day,” as the public security minister put it. On the other hand, if you wear left-wing glasses, the evacuation of the small community—finally!—is seen as a cause for celebration.

We have gotten used to seeing both sides facing each other with their mouths open, shouting their “just” arguments, yet shutting their ears to the other side’s arguments. But do the ideological glasses justify the automatic reactions of right-wing sadness and left-wing joy in light of the event? An examining look into the fundamental sensitivities of the Right and the Left should lead to a different reaction.

Why is the Right sad? Because the Amona “expulsion” constitutes a withdrawal—although a small and tactical one until the next hill and the Regulation Bill—from its vision to apply Israeli sovereignty over the Judea and Samaria lands. But what value does sovereignty have if the state will be incapable of implementing decisions made by the empowered authorities—in this case the court?

The rightists should understand the importance of statehood and respect the value of national unity, which allow decisions to be made and implemented. Therefore, they must be the strongest opposition to insubordination and the main speakers in favor of implementing the democratic decisions of the kingdom and the rule of law. This is a basic value of a real right-wing camp.

Why is the Left happy? Because the Amona evacuation indicates—if only for one slight moment and as a “joy of the miserable”—that there is still a possibility to stop the annexation trend, which will allow the division of the land into two states, one of which will be Jewish and democratic. This is an important national value, but for a real left-wing person there is one thing that comes before nationality: The humane sensitivity towards the suffering of any person wherever he is.

There is no doubt that the Amona people are experiencing real suffering these days, not just due to their housing distress but mainly because of the feeling that a dream has been shattered. People evacuated from houses they lived in for 20 years, in poor conditions, for the sake of fulfilling an ideological vision, feel heartbroken.

The basic values of leftists should cause them to open their hearts, instinctively, to the Amona people’s distress. A left-wing camp that chooses to shut down its heart to its fellowman’s pain is unworthy of its name.

In a more mature world, of complex people, there should be contradicting feelings of sadness and joy in the hearts of each and every one of us, both rightists and leftists. The Right, alongside its obvious pain, should be glad and proud of the nation state for succeeding in implementing the rule of law, even if it contradicts the Right’s political plan. This is a real test for examining the level of internalization of its commitment to statehood. If the evacuation is completed without serious violence—and as I write these words, that is uncertain—the event will be considered a milestone in strengthening the Israeli statehood, which is the first and foremost national value.

The Left, alongside its obvious satisfaction, should internalize the human and simple demand, which originally referred to enemies—“don’t rejoice when your brother falls.” Granted, the Amona people built their home on a land that doesn’t belong to them, so their evacuation is necessary. Nonetheless, we are standing in front of people at a moment of personal crisis in light of the demolition of their home. A leftist should feel a basic sense of partnership towards them, similar to what he feels towards other evictees, Bedouins in the Negev or weakened populations in southern Tel Aviv. Suffering is suffering.

We will be able to better deal with the internal disputes if, at the first stage, each ideological camp goes back to the basic values, national statehood on the right and liberal humanism on the left. It’s a good basis for a wide social and moral partnership between Israel’s main ideological camps.

Prof. Yedidia Z. Stern is vice president of the Israel Democracy Institute and a professor of law at Bar-Ilan University.