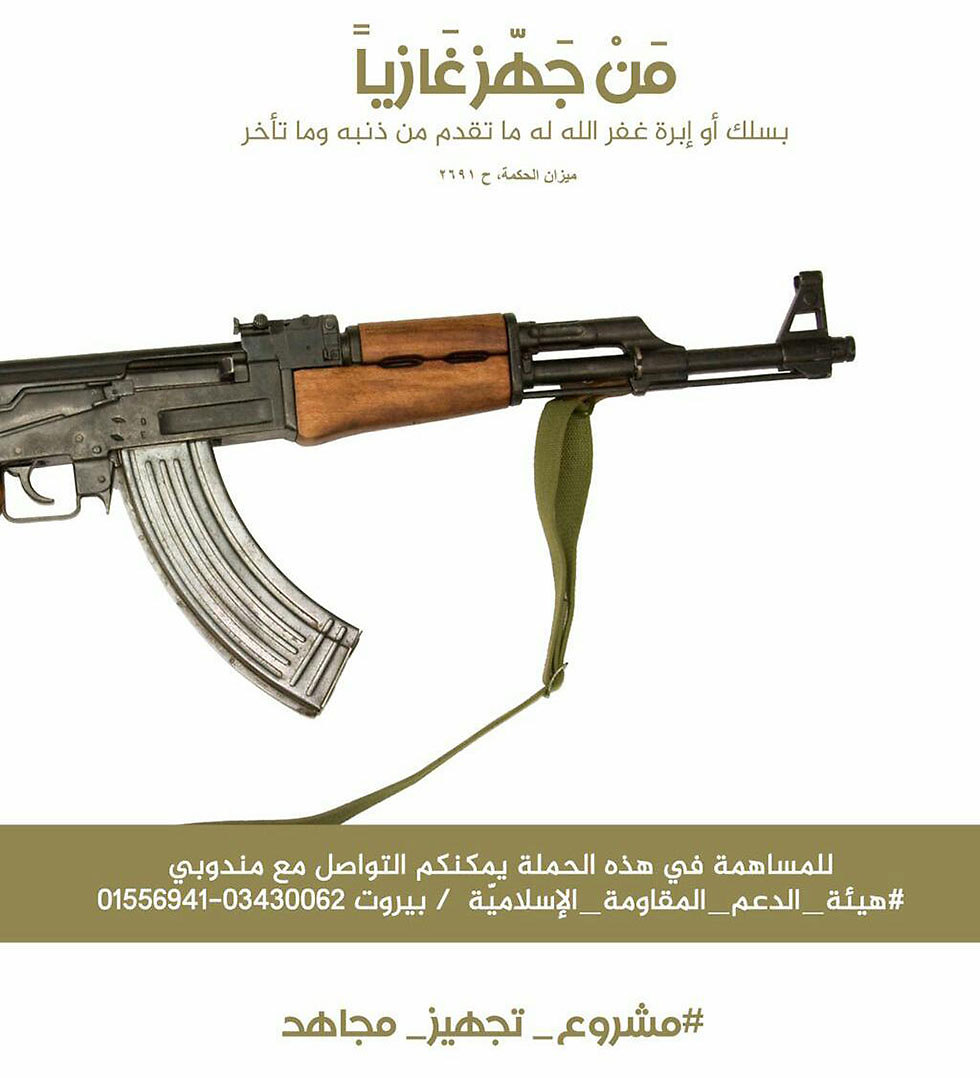 Hoping to raise funds for their combatants, particularly in their war efforts in Syria and against Israel, the terrorist group Hezbollah has launched a campaign appealing to the public to donate money.

The Lebanese terrorist group Hezbollah has launched a widespread campaign in recent days calling on member of the public to help finance its combatants and military activities. Under the slogan of "Money for Jihad is a Must", that was hashtagged and publicized on social media, Hezbollah is leading a campaign that has been dubbed "The Initiative to Arm Jihadists."

A picture of an AK 47 from the campaign, illustrating what the donation money can buy

In a video circulated on the group's twitter account, one of its members can be seen equipping himself and attempting to encourage the public to donate money to the cause.

"Whoever arms a fighter is considered to have fought," the group said as per the Islamic tradition and even added phone numbers to be used for the donations.

Another slogan from the video says: "You help; resist." The group's website states that "Jihadists who fight in the resistance need clothes and military equipment. This initiative allows you to help equip them…"

Readers are then given the option to donate money online, and are even given the choice of making payments in installments, for those wishing to give generous sums of money. Religious leaders also feature in the videos as the appeals are made.

One of the news website based in the city of Tyre even added a form that can be used to donate. The appeals include detailed photos of the equipment that could be purchased with donation funds. The pictures were also uploaded to social networks.

This is not the first time Hezbollah has launched a campaign of such sort. However, when compared with its last efforts, the present crowd-funding round is far more widespread and intensive.

The extent of the campaign raises questions about the financial difficulties the group may be suffering flowing from the fighting in Syria against the rebels and other Jihadist groups which is draining them of precious military equipment.

Excerpts of an interview of Hezbollah Deputy Secretary-General Naim Qassem that is expected to be released in full on Friday were published today in the Al-Binaa newspaper.

In it, Qassem said that "Hezbollah is not concerned to calm Israel or relieve its fears. Our message is uniform and unchanging and it is that we are willing to pay the price of the conflict. Are you?"

Qassem also added remarks belittling the reports that Turkey is demanding that Hezbollah retreat back to Lebanon as part of its arrangement with Syria, saying: "Hezbollah's retreat from Syria is not part of the equation of Syria's political solution."