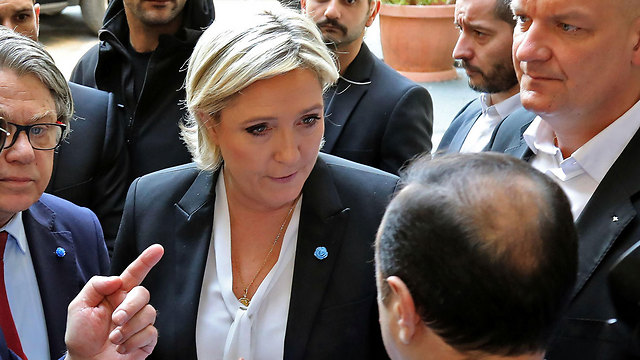 Marine Le Pen, France's far-right presidential candidate, cancels a meeting on Tuesday with Lebanon's Grand Mufti after refusing to wear a headscarf: 'I will not cover myself up.'

Marine Le Pen, presidential candidate for France's far-right National Front party, cancelled a meeting on Tuesday with Lebanon's Grand Mufti after refusing to wear a headscarf for the encounter.

"When I met with the Sheikh of al-Azhar (in Egypt in 2015), I didn't don a headscarf then and I will not do so now," Le Pen was quoted in the Lebanese press.

"You can pass on my respects to the Grand Mufti, but I will not cover myself up," Le Pen told reporters.

According to the reports, Le Pen arrived at the Mufti's chambers in Beirut and left soon after without seeing him.

The press office for the Grand Mufti said that Le Pen's aides had been informed beforehand of their requirement for her to wear head covering for the meeting. It was hinted that her response might have been a planned provocation.

Le Pen has been visiting Lebanon as she seeks to bolster her presidential credentials.

On Monday, she met with the Lebanese President Michel Aoun (her first meeting with a leader of a foreign country), Lebanese Prime Minister Saad Hariri and heads of state ministries.

During her visit, Le Pen stated that Syrian President Bashar al-Assad is the only alternative to ISIS, a statement that would surely be met with a certain amount of backlash from political parties in Lebanon. She continued to say that there is no solution for the civil war in Syria other than choosing between the Syrian president and ISIS.

Opinion polls say Le Pen is likely to get the highest score in the first round of voting in April, but then lose to a mainstream candidate in the decisive second round vote in May.