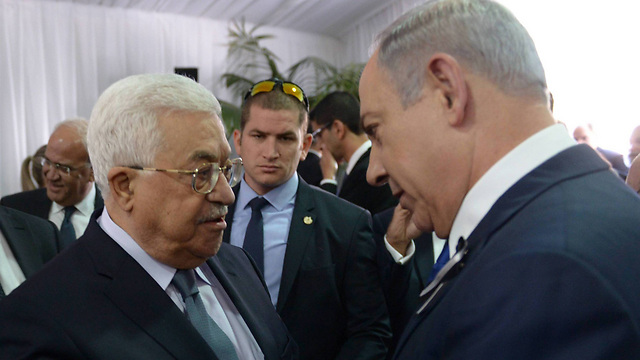 What if a two-state solution could be achieved tomorrow?

Op-ed: Any signed peace agreement between Israel and the Palestinians would prove inadequate for the global movements such as BDS, terror organizations and the masses across the globe bent on bringing about Israel's total eradication as the nation state of the Jewish people.

Israel has longed for it since its creation. From the 1930 Shaw Commission report to the Peel Commission of 1937 to the partition plan of 1947, Israel has had two fundamental goals: Establishing a Jewish homeland and living side by side, in peace, with its neighbors.

Since then, we have witnessed repeated negotiation failures. Arab rejectionism has placed Israel in a state of permanent insecurity. Security requirements are flippantly dismissed as listeners grow tired of the same old story. Settlers supposedly pose obstacles to peace. Each side blames the other. More blood is spilled. And so the cycle goes on as generations fall victim to the concomitant animosity.

But imagine if tomorrow Benjamin Netanyahu and Mahmoud Abbas were able to sit down, reconcile their differences, accept the adjustment of boundaries which would oversee the creation of a Palestinian state and sign a peace agreement that would surely be considered one of the greatest documents of modern history. What if the two sides accepted it and their respective populations would know no more war, no more sorrow.

This article posits that peace between Israel and the Palestinians is as much a question of international acceptability as it is one of local attainability. It argues that the generally accepted paradigm of Israel-Palestine in which conflict resolution operates is flawed and that in fact any solution would inevitably be stymied by global intransigence.

To begin with, there are some important questions to consider as we look at the lowest levels of popular anti-Israel opinion. If peace were achieved tomorrow, would the public chants calling for Israel’s destruction such as “Palestine to be free from the river to the sea” cease to be heard on the streets of Europe and North America? Similarly, would cries such as “we are all Hamas now” be scrapped from the parlance of Palestinian solidarity marches? If peace were achieved, could we expect that belabored questions over the legality of the 1917 Balfour Declaration would no longer be raised? And would the world refrain from invoking the notion of the “right of return for Palestinian refugees”?

Would Zionism still be equated with racism or would it be embraced as the national liberation movement for Jewish people? Would the Jewish project be permitted to pursue its national and religious aspirations? Would Israel be given freedom to determine its own domestic and immigration policy, like all other states, without the constant international scrutiny which shadows its every movement?

Indeed, one would hope that questions such as these which call into question Israel’s conduct and the morality and legitimacy of its birth would surely be banished into the realm of moral redundancy and linguistic obscurity if a peace treaty were signed.

Alone, these chants, questions and incriminations pose no immediate threat. However, the crux of the problem is that they would have the political channels through which to translate them from words into action.

Indeed, there are the pernicious movements such as BDS whose founding leaders, such as Omar Barghouti, have demonstrated their incorrigible stance on the issue stating unequivocally that "an Israeli withdrawal from the West Bank would not lead to the end of BDS because Palestinian people are not just suffering from occupation…they are suffering from denial of their right to come back home.”

Another leader of the movement, Ahmed Moor, says that BDS should be the “Final Showdown…nothing resembling the ‘two-state solution’ will ever come into being. Ending the occupation doesn’t mean anything if it doesn’t mean upending the Jewish State itself.”

In other words, even if a ratified agreement were to carry the imprimatur of Palestinian approval, this would not be satisfactory to those who openly proclaim their determination to continue their onslaught against Israel and seek to deprive it of economic sustenance.

Are we to believe that the BDS movement, which is followed by huge number of radical activists committed to Israel's collapse, would lose its momentum and disband in the face of an agreement?

Then, of course, there are the “resistance” and “liberation” movements such as Hamas, which are unlikely to evaporate in the heat of excitement for an Israeli-PA-sponsored agreement. Even if such an agreement dictated the lifting of restrictions on Gaza’s imports, would this assuage Hamas’s minatory behavior towards Israel and would Hamas repudiate the genocidal endeavors expounded in its charter against Jews? Would Hezbollah follow suit? Would ISIS divert its gaze away from Jerusalem?

Finally, serious questions would begin to surface about the legal validity of any such agreement to which Mahmoud Abbas would be a signatory. Today he represents a leader and symbol of the PA. He is the statesman to whom people turn with hope of bringing about a peaceful resolution. But Abbas’s term has long expired and it would come as no surprise if, from the moment he concluded a peace treaty with Israel, the objections would begin. Would the world consider a treaty to be legally binding if signed by an individual bereft of a democratic mandate to speak for the Palestinian people or negotiate on their behalf?

These questions are not posed with the expectation that a peace agreement would be so comprehensive that all of these concerns would be allayed. Public opinion is diverse and Israel could survive with the continuing revisionist narratives of its history.

However, it does seem unlikely, given the zeal of Israel’s critics and enemies, that any agreement would release Israel from the burdensome realities outlined here. BDS would continue, Hamas and its influence would live on, low level public opinion would not subsequently welcome Israel as a regular state and, most importantly, Mahmoud Abbas’s tenuous claims to political authority would not carry sufficient weight to satisfy the millions who will not rest until Israel either ceases to exist entirely or who rigidly subscribe to the notion that any agreement must ensure that a future Palestinian state comprise nothing less than the pre-June 1967 borders.

Thus if a peace agreement really could be forged between at least the majority of Palestinians and Israelis tomorrow, it is doubtful that it would ever satisfy millions of people worldwide who would have the tools at their disposal to render a peace treaty irrelevant.

Indeed, it would essentially amount to Israeli concessions without any reliable guarantees of normality or acceptance in the international arena. The likelihood of continuity of the respective methods of these “resistance” movements would only engender conflict and foment hatred that should have been put to rest by the Palestinians and Israelis alone.

This begs the question, therefore, which is rarely asked: With whom is Israel really expected to make peace: the Palestinians or the entire diversity of world opinion? If it is with the Palestinian people only, then a plausible case for the likelihood of success based on mutually acceptable concessions could perhaps be made. But if much of the world and radical factions would seek to undermine any agreement that even Israel’s new Palestinian peace partners would be powerless to stop, then Israel really faces a predicament which no negotiator can ever overcome—pleasing everyone with an opinion.

Alas, the peace process is actually not restricted to the Israelis and the Palestinians, for the problem stretches far beyond the borders of the Holy Land. In reality Israel finds itself in a far more precarious peace process with a significant portion of the world.

Amid promises of continued religiously-motivated aggression, economic boycotts and public calls for Israel’s eradication, combined with Abbas’s questionable authority to sign any agreement, prospects of a successful peace do not bode well.

So what if peace between Israelis and Palestinians could be achieved tomorrow? The answer for much of the world lies in the question itself: So what?