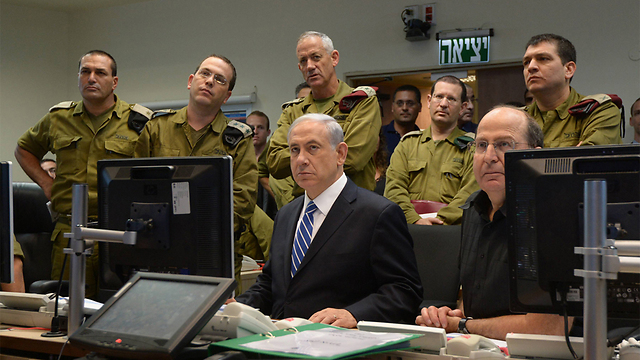 Speaking in a conference ahead of the publication of a state comptroller report this week, which is expected to contain a myriad of reservations about the handling of the 2014 Gaza campaign, Gantz insists on operation's success; says he is 'prepared to go to the next round with the intelligence as it was in the last one.'

Former IDF Chief of Staff Lieutenant General Benny Gantz rebuffed on Friday a series of expected findings about Operation Protective Edge, ahead of a publication by the state comptroller of a report into the 50-day military campaign. “I don’t accept what is written there,” said Gantz—who presided over the 2014 operation—at a closed event, according to reporter Isaac Dabush from Yedioth Ahronoth.

Benny Gantz stands behind PM Netanyahu and Moshe Ya'alon (Photo: Haim Zach/GPO)
Gantz insisted that contrary to apparent claims of failed intelligence, particularly pertaining to the tunnel threat from Gaza, the preparation was comprehensive and based on excellent information. “It is impossible to implement a deployment and succeed in wars without intelligence,” he said. “In Protective Edge, the intelligence was great, accessible and always complete." So confident was Gantz in the information on which he based the waging of the war, he added: “I am ready to go to the next round with the intelligence as it was in the last one.” Gantz’s comments were made in a similar tone to Moshe Ya’alon, who served as defense minister at the time of the operation.

Hamas tunnels in Gaza (Photo: Reuters)
In a video uploaded to his Facebook page, Ya’alon said “There are those who leak, and there are those who fight.” “In the coming weeks you will hear an awful lot about Protective Edge. Whoever was playing politics in the cabinet then during the war, will continue to do so this week,” Ya’alon wrote on his Facebook page. “They will tell you they didn’t know, that nobody told them, that nobody reported to them. And the biggest lie of all? They will say that we were not prepared and that we lost. This is nonsense.” However, the preemptive defense put up by Gantz and Ya’alon has already found itself absorbing shots from big guns in the military establishment, including from the likes of Yoav Galant, the former head of the IDF's Southern Command.

“The soldiers of Protective Edge fought like heroes,” he said, before going on the offensive against the two.

“Gantz and Ya’alon failed. (There was) negligence, contempt in the preparations, hesitation in deploying the force. At the moment they are hiding under the apron of the cabinet,” Galant wrote in his Twitter page.

IDF soldier at the opening of a Hamas tunnel (Photo: IDF Spokesperson's Unit)

The report is expected to contain fierce criticism against how Gantz operated, along with a number of officials from the senior general staff, including the then head of intelligence Aviv Kohavi, who now serves in the northern command.

However, Gantz expressed his steadfast support for Kohavi, describing him as “the best intelligence chief in the IDF in the last 40 years.”

“He made big reforms that (IDF Military Intelligence General Herzi Halevi) is continuing, I imagine. All the criticism that has been heard in the report on this, I don’t accept.”

Gantz also discussion the cooperation between the IDF and neighboring armies. “The IDF is stronger than all the regular armies in the region put together,” he continued, adding that “We have wonderful cooperation with Egypt” and that he supports reforms for shortening mandatory military service.

Transcripts from the cabinet meetings during the operation, which were obtained by Yedioth Ahronoth, show that the chief of staff cooperated with Netanyahu and Ya’alon’s concept of Hamas containment.

“Hamas doesn’t want to act,” Gantz was quoted as saying in one of the meetings. In a later session, Gantz said "I am against a ground operation. There have been big achievements up to this point. Hamas is beaten, the tunnels are a reasonable threat.”

The comments on the tunnels were made before they became the central strategic target of the war.

According to the minutes, Bayit Yehudi leader Naftali Bennett appeared to be the most vociferous proponent of a more aggressive campaign.

“I expect you all to come to the cabinet with an operational plan with an offensive spirit. It is not me that is supposed to bring a plan here for the destruction of the tunnels,” he said during one meeting. “Be galloping horses and not lazy bulls.”

Along with Ya’alon and Gantz, Prime Minister Benjamin Netanyahu is also expected to find himself the subject of censure, particularly over his handling of the security cabinet during the operation.