A Hamas tunnel in Gaza. The ongoing hysteria uncovers the Israeli public's weakness 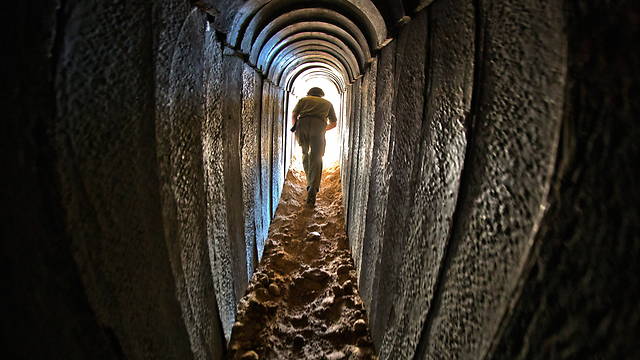 Tunnels are not a strategic threat

Op-ed: Focusing on the issue of offensive tunnels harms the State of Israel’s vital interests and diverts the leaders and public’s attention from the real and more serious strategic threats.

The state comptroller’s report on Operation Protective Edge includes quite a few important points, mainly in terms of the political echelon’s conduct. Nevertheless, the comptroller’s focus on the tunnel threat—and the lively public discourse it created around this concrete issue—has caused, in itself, strategic damage to the State of Israel.

The first question that needs to be asked is what constitutes a strategic threat and what an existential threat. Organizing the hierarchy of threats in the State of Israel’s complex and changing environment is obviously very important. Such a definition of the hierarchy of threats, by the top political echelon, should have created clarity for the security organizations regarding their list of priorities in building and using the force.

There is a dangerous illusion that a technical solution to the tunnels will solve the Gaza problem (Photo: EPA)

Defining a certain issue as an “existential threat,” which could endanger the heart of the State of Israel’s existence, will therefore require far-reaching moves; a “strategic threat,” which could cause serious long-term damage to the state’s crucial interests, will require fewer tools and measures; while threats defined as systemic or tactical will require proper responses on a lower scale. Such a hierarchy of threats and responses will allow us to focus on the essence, even at the expense of less crucial areas.

The State of Israel hasn’t had, and doesn’t have, an organized and acceptable structure of threats and responses, not even on the crucial level of national security.

Obscurity and vagueness is the name of the game. This has critical practical consequences, when the army finds itself every now and then without clear instructions from the political echelon. The chief of staff has already complained about this in public in the important essay on “The IDF’s strategy” from August 2015.

It’s now clear that before Protective Edge there was no clarity regarding the tunnels’ place in the national and military agenda either. Today, there are those who wrongly argue that the army, or the head of the Military Intelligence Directorate, were the ones who should have determined the list of priorities and included the Hamas tunnels in them.

Focusing on the issue of security-related threats, I would like to suggest that—unlike in the past—right now the State of Israel is facing no existential threats in the full sense of the word.

It may be possible to define the ongoing conflict with the Palestinians as such, and there are those who argue that the implementation of the Iranian nuclear program could constitute an existential threat. There is a public debate among the Israelis over these two issues.

In addition, Israel is facing a long series of strategic threats which I will not elaborate on here. I will stress, however, that I believe the tunnels—on the Hamas front and on the Hezbollah front—are not part of this list. Offensive tunnels clearly pose a risk, even a systematic risk, if they are not tackled by a proper defensive system.

Such a system in the form of a complex barrier is being built now, perhaps a bit too late, based on the fence encircling the Gaza Strip, at a cost in excess of NIS 3 billion.

The question is whether such a huge sum should be spent on this target. Is it enough to completely prevent a direct threat in the communities adjacent to the fence? I doubt it. Can any damage to these communities, in the north or in the south, be considered an existential or strategic threat? The answer, in my opinion, is no.

A proper systematic solution to the threat on communities adjacent to the fence is a combination of a military presence and an evacuation of citizens from the communities as soon as the military flare-up begins.

The focus on the issue of offensive tunnels, which is now being re-leveraged by the state comptroller’s report, harms the State of Israel’s vital interests.

It diverts the attention of the leaders and the public from the real and more serious strategic threats and could create a dangerous illusion that a technical solution to the tunnels will solve the Gaza problem, which remains with us like a truly dangerous strategic time bomb.

But beyond all that, the ongoing hysteria over the tunnel issue, which is definitely an immediate challenge for the Gaza vicinity residents, uncovers a weakness of the Israeli public and encourages the enemy to initiate attacks on the heart of the civilian area.

I am in favor, therefore, of a proportional reference to the tunnel threat, but against presenting them as a strategic or even existential threat.

In addition, we must remember that there is no physical shield available which can totally defend citizens against a determined enemy. To all types of physical defense we must add an investment in the area of social strength development, so that Israel’s citizens will know how to recover and return to full systemic functioning after sustaining possible damage.

Brigadier-General (res.) Dr. Meir Elran is a senior research fellow and head of the Homeland Security Program and a co-head of the Society–Military Program of the Institute for National Security Studies (INSS). He is a former deputy director of Military Intelligence.