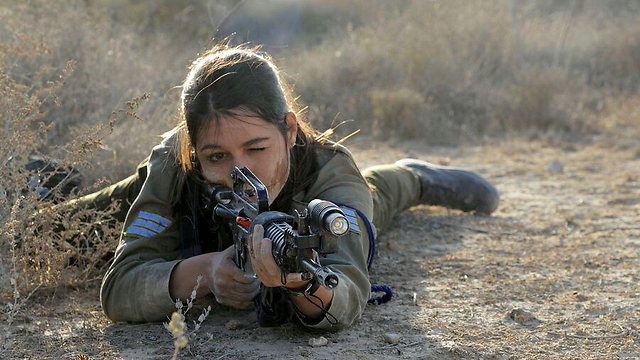 Women enlistment and rank in the IDF on the rise

Despite Rabbi Levinstein's recent disparaging remarks on women in the IDF, air defense commander cites women’s integral role in keeping Israel safe; women's motivation to serve in combat roles is steadily increasing, as is their numbers and ranks in the Air Defense Command.

Women serving in the IDF's Air Defense Command are expected to rise in ranks at a rapid pace, as their enlistment numbers to combat units are steadily increasing.

Speaking in a conversation with Ynet, Commander of Aerial Defense Brigadier General Zvika Haimovich said that "today, one third of the combatants in the Air Defense Command are women, and there is no reason that it won't increase in the future."

As of today, 15 female officers serving in the Air Defense Command hold core positions in the force. According to Brig. Gen. Haimovich's estimation, at least one of them could be promoted to Battalion Deputy Commander within the next two years, and then to Battalion Commander.

However, news of Levinstein’s remarks did not stop dozens of women enlisting at the IDF's induction center on Wednesday to be recruited for Air Defense Command units such as Iron Dome and David’s Sling (formerly known as Magic Wand), which became operational just a few weeks ago.

The units, designed to defend both army and civilian populations from rockets and artillery attacks, gained even more importance in recent weeks, as incidents of rockets fired from Gaza saw a worrying increase.

About a month ago, Iron Dome was activated after two years of relative quiet since Operation Protective Edge in 2014.

In February, a combatant and a young second lieutenant, who were on duty during a usual quiet evening shift, identified at 22:55 a barrage of four Grad missiles launched 40 kilometers away in the Sinai Peninsula.

The two made the decision to fire interceptor rockets towards three of the missiles, before they could crash on hotels and residential houses in Eilat.

"Only the fourth missile fell in an open, uninhabited field, so if it wasn’t for those two soldiers, you would see about 40 thousand tourist and residents fleeing the city the next day," Haimovich said.