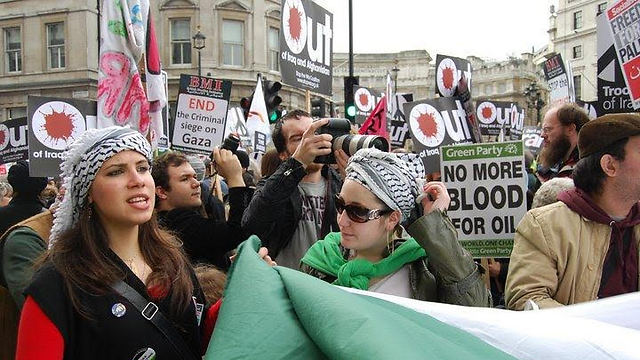 Israel's Ministry of Strategic Affairs denies entry of a prominent BDS activist ahead of new law's approval; 'No sane country would allow entry to key boycott activists working to harm the country's core interests and lead to its isolation.'

Israel's Ministry of Strategic Affairs said Monday that it denied a prominent British boycott activist entry into the country.

Revital Yakin-Karkovsky, a senior ministry official, said Hugh Lanning of the Palestine Solidarity Campaign was prohibited Sunday from entering Israel because his organization had close ties to the Hamas militant group and was one of the leading forces seeking to delegitimize Israel.

BDS demonstration
Israel's parliament recently passed a law barring entry to supporters of the boycott movement. The measure drew fierce criticism from dovish groups who condemned it as the latest in a series of steps to silence critics and ministry officials struggled to explain how it would be enforced.

The the BDS movement advocates boycotts, divestment and sanctions against Israel in what supporters say is a nonviolent way to promote the Palestinian struggle for independence. It has urged businesses, artists and universities to sever ties with Israel and includes thousands of volunteers around the world.

The new law barring BDS supporters has yet to take effect. Yakin-Karkovsky said it would take weeks to formulate and Lanning was barred based on existing policies.

"Whoever acts against Israel should understand that the rules of the game have changed. No sane country would allow entry to key boycott activists working to harm the country's core interests and lead to its isolation," said prohibited Gilad Erdan (Likud).

Ben Jamal, the director of the Palestine Solidarity Campaign, called Lanning the "first victim" of the new law.

"A democratic country does not behave in the way Israel is behaving," he said.

Yakin-Karkovsky said it was reasonable for a country to refuse welcome to foreigners with a declared intent of undermining it strategically and causing it harm. She pointed to a similar 1971 immigration law in Britain that granted authorities wide discretion to decline entry to, or expel foreigners when it relates to "public interest" or security considerations.

The Israeli government has stated that the boycott campaign goes beyond Israel's occupation of lands claimed by the Palestinians and masks a deeper aim of delegitimizing or even destroying the country.

The law, which was approved by parliament last week, does not apply to Israeli citizens or permanent residents. It states that no visa or residence permit will be given to anyone who "knowingly issued a public call to impose a boycott against the State of Israel or committed to participate in a boycott."