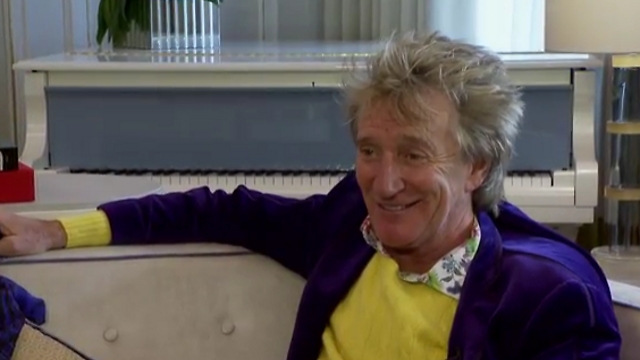 Watch: With a music legacy that smelts cheeky dance moves with a slow-moving sense of romance, 72-year-old crooner Rod Stewart still loves to perform, even if nowadays he might have a momentary lapse of memory; Stewart is set to perform for the third time in Israel on June 14.

Almost 40 years after he brashly asked the world, "Do You Think I'm Sexy," Rod Stewart's question is still answered in the affirmative. The rocker and heartthrob continues to be fit enough to dance on stage, kick a soccer ball at his fans, belt out hit after hit and keep his hair in that spiky golden 'do that has become his identifying mark. At 72, it's apparent that he is still a bad boy through and through.

Earlier this month, Stewart's name was mentioned in the press after he was caught on video imitating an ISIS beheading. Several months prior, he drew team names for the Scottish Cup tournament while in a particularly jubilant mood, attributed by some people to his love of alcohol.

"I've never really took to drugs. I do like me drinks, and my rock n' roll and my sex," admitted Stewart. "We all came into the music business because we deeply deeply loved it. I was given a gift by God to sing, and I've worked at it."

Speaking of the longevity of his career, Stewart said, "I can't see it going on for another five-to-ten years," before adding that "hopefully I'll keeping singing for the rest of my life. I don't think about it too much; I've had a great life, and I'm blessed, I've got wonderful children. But I'll miss it."

Stewart will be giving his third performance in Israel on June 14 at Tel Aviv's Yarkon Park. "The audiences were tremendous," said Stewart of his previous Israeli audiences. "Both events were wonderful. I'm looking forward to the next one."

(Photo: Splash News)
He promised that Israeli fans can expect "happiness, um, you know, energy, colour, music." He assured that "It's gonna a very entertaining show. It'll be all the songs that people want to hear, plus some new ones." "As long as I'm not eating or having a coffee, I'll sign anything and have photos taken."