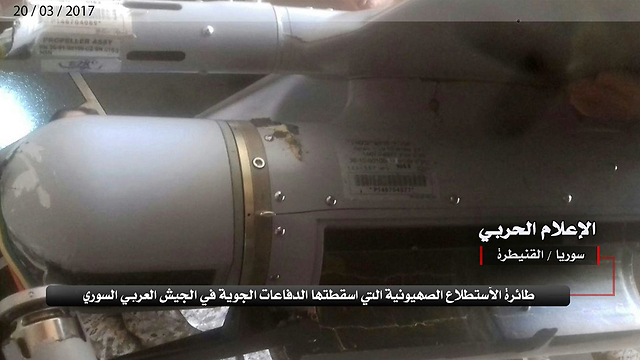 Hezbollah claims to have seized an IDF drone

IDF confirms drone crashed in Syrian territory, while Hezbollah claims that it was shot down by the Syrian army; photos show Hebrew ID sticker linking the drone to the IDF.

Hezbollah-affiliated media released late Monday photos of an IDF Skylark drone reportedly shot down by Syria's air defense apparatus after it infiltrated Syrian airspace on the outskirts of Quneitra.

One of the photos of the unmanned aerial vehicle (UAV) showed a sticker identifying the drone as a Skylark belonging to the IDF's gound forces and manufactured by Elbit. The IDF confirmed that the UAV crashed Sunday in Syrian territory during military operations in the area, stressing there is no concern of a security breach. The circumstances of the incident are being investigated.

News networks affiliated with the Syrian regime reported on Sunday that the Syrian army chased away an Israeli UAV after it breached Syrian airspace. After that, it was reported that a militia soldier driving near Damascus was killed in a drone strike.

'IDF Ground Forces, Skylark series 10'
This is not the first time the Syrians reported on Israeli drones that were allegedly shot down or crashed in their territory.

About two months ago, an IDF Skylark drone crashed in Lebanon. It is possible that it’s the same drone in Hezbollah's photos.

Last week on Wednesday, yet another Skylark drone crashed within Gaza's borders during IDF military activity in Shuja'iyya.

The Skylark is the smallest UAV used by the IDF. It has a reputation for crashing during military activities.

These incidents usually only cause damage to the IDF's public image and pose no security risk, as these drone are programmed to shut down completely in such circumstances, and hold no classified information in their memory banks.

The majority of UAV crashes so far were caused by technical problems.