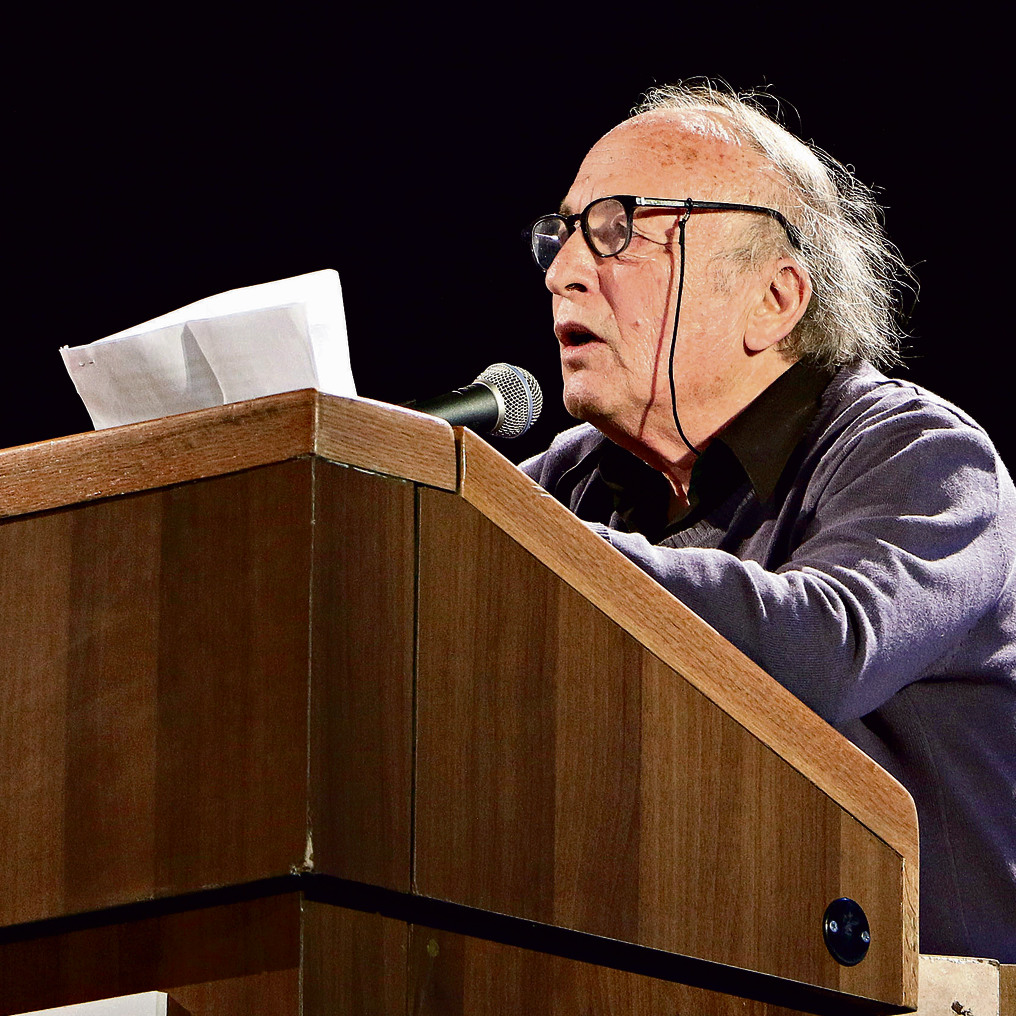 No guts, no artistic glory—Yair Garbuz out of the running for Israel Prize

Painter and author Yair Garbuz is one of the most esteemed Israeli artists, but his Talismans Speech in Rabin Square on the eve of the last elections made him a hated figure amidst parts of Israeli society; Two years after that speech, Garbuz suffers the consequences as Bennett cancels the prize category, in which he was a leading candidate.

Two years after his controversial, or as some would say, recriminatory Talismans Speech, in which he attacked specific groups in Israeli society as "Talisman toters and those prostrating themselves in supplication on the tombs of the saints,” artist Yair Garbuz is paying the price—with interest. Yedioth Ahronoth has learned that Education Minister Naftali Bennett had a hand in hindering plans to award Garbuz the Israel Prize.

Garbuz—a painter, writer, and veteran leftist—had never hidden his political views. However, the speech he gave at Rabin Square on the eve of the 2015 elections managed to rouse the furor of members of his own camp. It was considered one of the most influential events during the last election campaign, possibly serving as one of the factors leading to the left-wing’s defeat.

In the speech, which took place a mere ten days before the elections, Garbuz spoke of "the handful" and said: "We were told that the despicable man who murdered the prime minister came from a handful of delusional people ... We were told that the yellow shirted, black symbol-ed ‘Kahane was right’ people, and the 'Death to Arabs!' hurlers, were no more than a handful—a mere handful! ... That the wicked price taggers are certainly a handful ... and they told us that the threatening, disparaging racists do not represent Israeli society at all, that they are only a handful!”

The rest of that sentence touched a particularly raw nerve when Garbuz referred to "the Talisman toters, the pagans and those prostrating themselves in supplication on the tombs of the saints—only a handful! Even the sexual predators and the rapists, the dirty cops and the liars are still just a handful ... If all these people are just a handful, then how come that handful is governing over us? How is it possible that stealthily, and decidedly undisturbed, that handful became the majority?”

His speech was perceived as a blunt and unrelenting attack on the kippa (skullcaps) wearers, the Sephardim and the right wing in general, incurring great anger and harsh public criticism.

Since the elections, Garbuz has disappeared from the public eye and the storm simmered down. The Israel Prize Committee for Plastic Arts, which recently convened, discussed the possibility of awarding Garbuz the prize for his artistic work. However, the Israel Prize Regulations stipulate that the prize winner in each category can only be elected by unanimous consent of all the members of the committee, without exception.

The members of the Plastic Arts Committee met twice for two rounds of consultations, but failed to reach unanimous agreement: three out of four supported Garbuz's win, while the fourth objected.

The chairman of the committee was the sculptor and painter Prof. Jacob Dorchin, himself an Israel Prize laureate. Alongside him were Israel Dahan, Dr. Aya Lurie and Prof. Haim Maor.

The Minister of Education is the minister responsible for the Israel Prizes, and the regulations stipulate that he is to remain uninvolved in the process and in electing the names of the candidates. However, in case of disagreement among committee members, the issue is handed over to him. The Minister has the authority to order the convening of an additional committee—or to completely cancel the awarding of the prize in the field in question. After the members of the Plastic Arts Committee failed to reach a decision, Minister Bennett ordered the committee to refrain from re-convening and cancel this year’s prize in the field of plastic arts.

The committee's final minutes read: "The judging committee for the 2017 Israel Prize in the field of plastic arts could not reach unanimous agreement on any of the candidates."

Sources familiar with the field told Yedioth Ahronoth that a situation in which the committee is unable to reach unanimous agreement is very rare, and so is the transfer of the issue to the education minister.

Bennett's office said in response: "Bennett was not involved in any stage of the committee's work, and when the disagreement was brought to his attention, the minister acted in accordance with procedure."