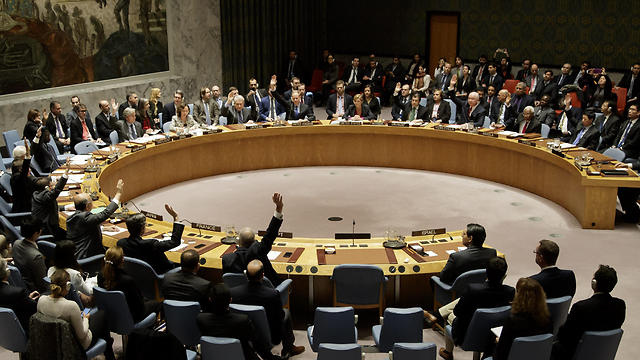 UN envoy Nickolay Mladenov told the council the large number of settlement announcements and legislation action by Israel indicate 'a clear intent to continue expanding the settlement enterprise in the occupied Palestinian territory.'

Israel took no steps to comply with a Security Council call to stop all settlement activity in the West Bank and east Jerusalem, and instead authorized "a high rate" of settlement expansions in violation of international law, the United Nations said Friday.

UN envoy Nickolay Mladenov told the council the large number of settlement announcements and legislation action by Israel indicate "a clear intent to continue expanding the settlement enterprise in the occupied Palestinian territory."

He was delivering the first report to the council on implementation of the resolution it adopted in December condemning Israeli settlements as a "flagrant violation" of international law.

Mladenov, the UN special coordinator for the Middle East peace process, reiterated that the United Nations "considers all settlement activities to be illegal under international law and one of the main obstacles to peace."

He called "the January spike" in illegal settlement announcements by Israel "deeply concerning." During that month, he said, two major announcements were made for a total of 5,500 housing units in Area C, the 60 percent of the West Bank exclusively controlled by Israel.

"Overall, the last three months have seen a high rate of settlement-related activity, especially when compared to 2016, which saw tenders for only 42 (housing) units issued and some 3,000 units advanced over 12 months in Area C," Mladenov said.

Israel's Ambassador to the UN Danny Danon responded in a statement, saying "there is no moral equivalency between the building of homes and murderous terrorism.

"The only impediment to peace is Palestinian violence and incitement. This obsessive focus on Israel must end."

Mladenov said "many advancements in settlements in the past three months will further sever the territorial contiguity of a future Palestinian state and accelerate the fragmentation of the West Bank."

He said these actions in Kfar Adumim, Shiloh, Kokhav Yakov and Shavei Shomron "are in breach of international law and they must stop."

"Settlement expansion undermines the very essence of the two-state solution," Mladenov said, and the resolution states that the international community will not recognize any changes to the 1967 lines other than those agreed by the parties through negotiations."

Mladenov's comments come 24 hours after Israeli and American officials released a joint statement on a series of conversations between Israeli emissaries and their US counterparts on the Israeli-Palestinian conflict.

"The Israeli delegation made it clear that Israel intends to adopt a policy on settlement construction that will take President Trump's concerns into consideration. The talks were serious and constructive, and will continue."

Israeli and American officials further commented that, "Officials concluded four days of intensive talks in which concrete steps are being taken to improve the climate in order to advance the chances of a real and long-lasting peace between Israel and the Palestinians."