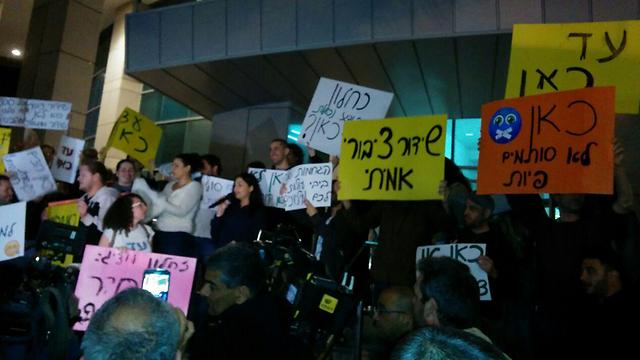 Following the agreement between Netanyahu and Kahlon on the establishment of a separate news corporation, hundreds demonstrate in Tel Aviv: ‘This is not a compromise, it is treachery.’

Hundreds of employees of the Israel Public Broadcasting Corporation (IPBC) protested Saturday night against the decision to establish a separate news corporation. Shortly before 9:00pm, they blocked the Azrieli Intersection.

"Enough is enough,” “broadcasting for the people," shouted the protesters. The signs carried by the demonstrators read, "Here is free media," "Kahlon, you failed housing, gas and here," "This is not a compromise, it is treachery," and "democracy = free journalism."

"This time, when we say that Israeli democracy is in danger—it's not a cliché," said Yaara Shapira, one of the IPBC employees. “The members of government are declaring they are taking over a public broadcasting body. We can’t let that happen… Minister Kahlon has failed. This corrupt deal is going to cost hundreds of millions of shekels. Kahlon has failed both in values and in the budget… We will not allow the government to stop the freedom of expression."

"Kahlon is not a communications minister, but as finance minister he kept the budget and therefore, a two-week postponement is not significant. The IPBC is not of any interest—not to our voters, and not to the people of Israel," said Eli Cohen, a member of Kahlon's Kulanu faction and Minister of the Economy.

According to the plan, the newly formed news department will be dismantled, and alongside the current corporation, another corporation will be established for news and current affairs. Newsmagzine programs, external productions and content that were designed for the IPBC will be canceled.

The journalists' organization appealed Friday to the attorney general in a letter of warning prior to appealing to the High Court of Justice demanding the employees to stop being harmed, as they remain in the dark with regard to their future.

The Knesset coalition chairman offered his two cents as dozens of demonstrators, employees of the IPBC, protested in front of his house. When one protester hurled in his direction: “Shame on you. You are the enemy of freedom of speech and democracy. The public will settle its score with you,” to which MK David Bitan responded, “You are bullies, I did not cheat anyone, I presented my stance from the beginning. You do not represent the democracy in the State of Israel. You weren’t worried about 1,500 IBA employees being fired.”