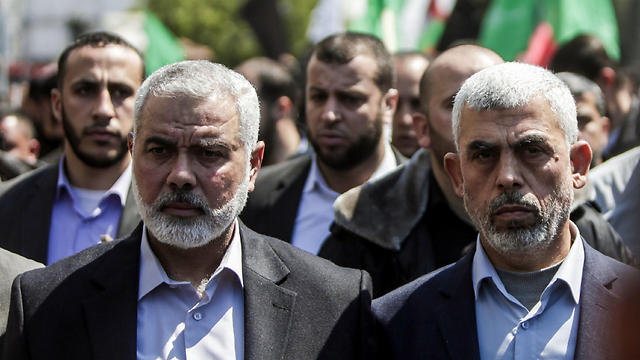 Op-ed: The cosmetic changes to the Hamas Charter won’t interfere with an Israeli peace initiative indicating that Israel is serious about making gradual progress toward an agreement with the Palestinians.

In recent weeks, the Arab media have been releasing reports in dribs and drabs about an impending dramatic publication of the amended Hamas Charter.Those expecting Hamas to recognize the State of Israel or waive the right of return for Palestinians will likely be disappointed: They won’t find it here. The softened language and the ideological invigoration are for internal political purposes in the Palestinian arena, for foreign policy purposes vis-à-vis the Arab world, and for gaining international political legitimization. There are two major changes in the charter. The first is an acceptance of the establishment of a Palestinian state with Jerusalem as its capital, based on the 1967 borders, and the second is severing ties with the Muslim Brotherhood movement. These two changes, however, come with a demand to cancel the Balfour Declaration, the Partition Plan and the Oslo Agreements, and statements about a holy war to fully liberate historic Palestine, from the Jordan River to the Mediterranean Sea, from north to south. The “Zionist entity” is illegitimate, Palestine is to be a Muslim Arab state (“a blessed and holy land”), while the colonialism that followed the creation of the Zionist movement due to anti-Semitism “must disappear from Palestine.”

Hamas leaders Ismail Haniyeh and Yahya Sanwar. The change of leadership, alongside a new charter, allegedly symbolize a dynamic movement adapting to a changing reality (Photo: AFP)
At the beginning of the document, Hamas is defined as an “Islamic Palestinian national liberation and resistance movement, whose goal is to liberate Palestine and resist the Zionist project.” Senior Hamas member Ahmed Yousef stressed in an interview that the acceptance of a Palestinian state in the 1967 borders was a way to maintain a national consensus, and that Hamas would accept an independent Palestinian state only if it would be allowed to hold onto the weapon of resistance. The same applies to the right of return, which is based on the “divine law,” on human rights and on international law, and cannot be denied or waived by any Palestinian, Arab or international element. Moreover, Hamas rejects any attempt to solve the refugee issue by resettling refugees outside Palestinian land. Jerusalem is defined in the new charter as Palestine’s capital, and there must be no concession on all or on part of the city. A lot of thought was apparently put into replacing the blatant anti-Semitic incitement of the original charter with less racist wording. Hamas, according to the new charter, “distinguishes between the Jews, the People of the Book, and Judaism as a religion, and between the occupation and the Zionist project (which is) racist and aggressive,” hostile to the Palestinian people and to its liberation, self-determination and return aspirations. The defined enemy right now is, therefore, the “Zionist project”: It is threatening the Arab and Islamic nation, as well as world peace and security. The State of Israel is not mentioned. Anti-Semitism—in a clear withdrawal from the original charter’s approach—is defined as “a phenomenon which has to do primarily with European history.”

The original Hamas Charter, which was issued in August 1988, shortly after the organization was founded, was filled with historically-distorted anti-Semitism: “…The society confronts a vicious enemy which acts in a way similar to Nazism, making no differentiation between man and woman, between children and old people… Our enemy relies on breaking bones, shooting at women, children and old people, with or without a reason.”

The anti-Semitic incitement continued throughout the charter, specifying the activities of the “Zionist Nazis” and the “warmongering Jews,” mentioning the Protocols of the Elders of Zion and attributing every incident in the past few centuries to the Jewish enemies. The new charter aims to upgrade Hamas’ standing in all of its activity centers. First of all, in its power base in the Gaza Strip: The change of leadership—with Yahya Sanwar instead of Ismail Haniyeh in Gaza and Khaled Mashal’s upcoming replacement as head of the political bureau—alongside a new charter allegedly symbolize a dynamic movement adapting to a changing reality. Second, the new charter aims to strengthen Hamas in the Palestinian internal political arena. Since Hamas’ violent takeover of the Gaza Strip in 2007, it has signed six reconciliation or unity agreement with Fatah. None of these agreements developed into a full and long-term leadership cooperation. The new acceptance of a Palestinian state within the 1967 borders—the PLO’s political banner—may pave the way to a better partnership that could represent the Palestinian people in any peace process which may take place. Third, Hamas wants to become a regional political player. Apart from a cautious strategy regarding Egypt in order to maintain its control of the strip, while neutralizing its affiliation with the Muslim Brotherhood, Hamas must maneuver between the players it depends on, mainly Iran and Saudi Arabia. The dialogue with the “Arab quartet”—Egypt, Saudi Arabia, Jordan and the United Arab Emirates—is another political and economic consideration for Hamas, and we must not forget the anticipated improvement in Hamas’ international legitimacy as a result of its alleged moderation. As for Israel, there is nothing in the new charter which could change Jerusalem’s perception that Hamas is an enemy that has not renounced incitement, violence and terror and that sees the conflict with Israel as a key component of its existence. Nevertheless, the cosmetic changes to the Hamas Charter won’t interfere with an Israeli peace initiative indicating that Israel is serious about making gradual progress toward an agreement with the Palestinians, which would include a reconstruction of the Gaza Strip in exchange for a security calm and preventing Hamas from growing stronger. Adv. Gilead Sher heads the Center for Applied Negotiations (CAN) and is a senior research fellow at the Institute for National Security Studies (INSS) at Tel Aviv University. He served as former Prime Minister Ehud Barak’s bureau chief.