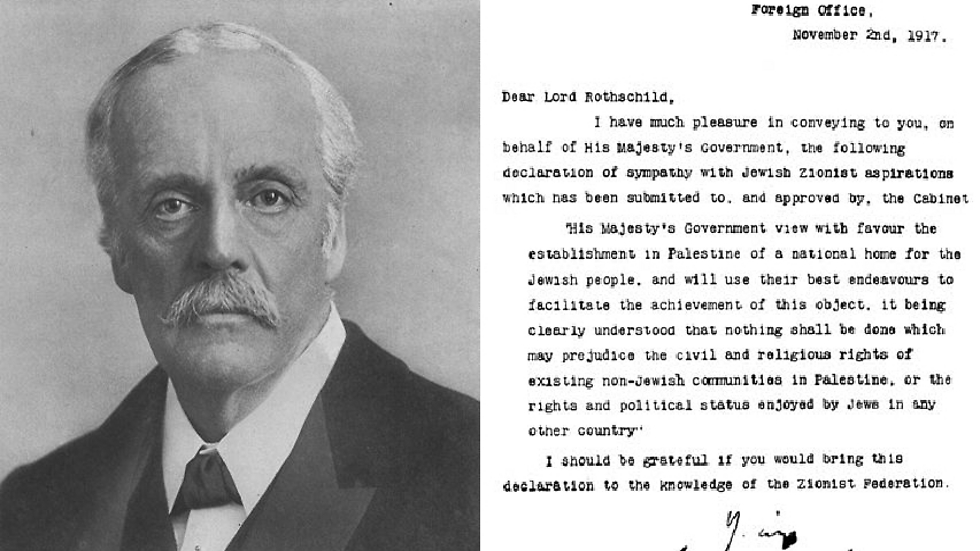 On the occasion of the 100th anniversary of the Balfour Declaration, which stated that a Jewish state be founded in the Holy Land, more than 11,000 people have signed an online petition calling on the British government to formally apologize for it.

More than 11,000 people have signed an online petition calling on the British government to formally apologize for the Balfour Declaration, a letter written by British Foreign Secretary Lord Balfour in 1917 expressing Britain’s support for the establishment of a Jewish national home in the Holy Land.

The petition was recently launched by the Balfour Apology Campaign (BAC) and calls for the British government “to openly apologize to the Palestinian people for issuing the Balfour Declaration.”

The 100th anniversary of the declaration, which many see as the document that paved the way for a Jewish state in Israel, will be marked in November, and British Prime Minister Theresa May has invited Israeli Prime Minister Benjamin Netanyahu to visit the UK for the occasion. Netanyahu has accepted the invitation.

Balfour and the declaration

The British government was responsible for mandatory Palestine from 1917 to 1948, when they withdrew just before Israel declared an independent Jewish state. Palestinians say they now want an apology.

“We have said clearly that we have been victims of British colonialism and that the least we would expect from the UK is to apologize to the Palestinian people,” Xavier Abu Eid, a spokesman for the PLO, told the Media Line. “A foreign colonial power decided to give Palestine to an organization that was not even in Palestine. This is one of the darkest episodes of the past 100 years.” As the petition has already reached 10,000 signatures, the British government must issue a formal response, within three days. Organizers said it had passed the 10,000 mark five days ago and they have yet to receive a response. If they reach 100,000 signatures, the petition will be considered for debate in parliament.

The Balfour Declaration, issued on November 2, 1917, was a 67-word statement as part of a letter addressed to Walter Rothschild, a leader of the British Jewish community.

The text reads as follows: His Majesty's government view with favour the establishment in Palestine of a national home for the Jewish people, and will use their best endeavours to facilitate the achievement of this object, it being clearly understood that nothing shall be done, which may prejudice the civil and religious rights of existing non-Jewish communities in Palestine, or the rights and political status enjoyed by Jews in any other country.”

The Balfour Apology Campaign says that it is this letter that is responsible for the fact that Palestinians do not have an independent Palestinian state today. “An apology would be recognition of the mistake that Britain made in the Balfour Declaration. “There are many precedents in which UK prime ministers recognized Britain’s role in causing suffering in its former colonies. “For example, Tony Blair in 1997 apologized to the Irish for the famine the country endured in the middle of the 19th century. Gordon Brown in 2009 issued a formal Government apology to thousands of British children who were shipped from Australia and other Commonwealth countries between 1920s and 1960s. Similarly, Cameron in 2011 recognized that Britain’s colonial history made it responsible for much of the historic problems in the world when he was discussing the dispute in Kashmir. “In addition, many leading scholars and historians such as Avi Shlaim stated that Britain should apologize to the Palestinians ‘for all the betrayal going back to the Balfour Declaration,’” the website of the Apology Campaign states. The Israeli government says it sees the Balfour Declaration as a significant marker in the history of the Jewish state. “It was the first time that a great power recognized the Jewish people as a people who deserve and have the right to build their home,” said Michal Maayan, a deputy spokesperson of the Israeli Foreign Ministry. “The same language appears later in the UN resolutions about the creation of Israel. We are marking the 100th anniversary of the Balfour Declaration.” She also said that the Palestinians are focusing on a 100-year-old document instead of finding ways to restart peace talks with Israel. “It is another example of the Palestnians’ refusal to recognize Israel’s right to exist and the Jewish people’s right to have a country in Israel,” Maayan said. “It shows their focus on the past instead of their commitment to find a peaceful resolution in the present.” PLO spokesman Abu Eid disagrees. “We don’t say there is no two-state solution. We recognized Israel within the 1967 borders and that recognition is still in force,” he said. “But it would make a difference if they acknowledged what they did to us.” Some Israeli academics note that the Balfour Declaration does not preclude the establishment of a Palestinian state. They have nothing to apologize for. The Balfour Declaration promised self-rule to the Jews without taking anything away from the Arabs,” said Moshe Zimmerman, a professor of history at the Hebrew University of Jerusalem. “Colonial powers thought they could allocate territory to anyone they wanted. If they (the British) have to apologize for anything it is for being a colonial power.”