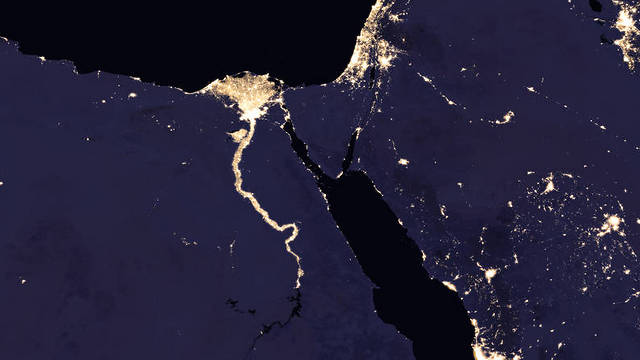 NASA releases new satellite images of the Earth at night

Israel lives up to its moniker as a ‘light unto the nations,’ shining brightly in an image that also shows an illuminated Nile river and Lebanese coast.

Israel can be seen in one of the pictures alongside Egypt. The small Jewish state is nearly entirely illuminated, as are cities alongside the coast of the Nile in Egypt.

NASA said the images, taken during the past year, point to the development of several countries and also to the way the Earth is “illuminated in the dark.”

The pictures show that the European continent, the eastern part of the United States, large parts of India, Japan, East China and other places in the world are illuminated at night.

On the other hand, the African continent is almost completely dark, with the exception of the Nile region, the Niger region and a few other small centers—mainly in the southern part of the continent and in the northern coastal strip.

NASA said the NASA-NOAA Suomi National Polar-orbiting Partnership (NPP) satellite, the satellite that records the lights on Earth, is about 3,000 kilometers above the planet and takes pictures every day. The US space agency said even the lights on ships at sea can be seen in the photographs,

Israel and Egypt as photographed last year from the International Space Station (Photo: NASA)
NASA has made some comparisons between photos taken in 2012 and photos taken last year to see new urban areas or the development of cities. Among other things, there is a significant increase in the amount of lights in India.